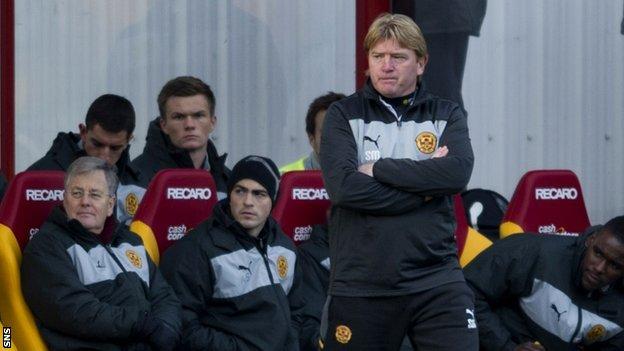 Motherwell's 0-0 result against Hearts did not surprise their manager Stuart McCall, as his team took their home league record to one win in eight.

However, McCall could at least savour Motherwell's first shut-out since the opening league game of the season.

"It was typical of what we thought might happen, a stalemate," he said.

"They were probably slightly better in the first half, but in the second half we upped the tempo a bit and early on we had a couple of opportunities."

Hearts came to Fir Park having conceded the fewest goals away from home in the Scottish Premier League.

But they had goalkeeper Jamie MacDonald to thank for fine saves from a Michael Higdon header in the first half and from a close-range shot from the same player after the break.

"Their keeper made a few decent saves. I think a draw is a fair outcome," was McCall's assessment.

"I believed them to be strong defensively and so it proved.

"When it's a tight game you are hoping for that one chance to fall.

"The pleasing thing is we got a clean sheet.

"We were better in the second half and a draw is probably a fair result. It was always going to be a tight game.

"We maybe could have nicked but it wasn't to be. There will be no doom and gloom."

The nature of the match might have changed had referee Crawford Allan opted to send off 'Well goalie Darren Randolph when, early in the game, he collided with Hearts striker Callum Paterson when leaping to collect a high 50-50 ball.

Instead, he decided the collision was accidental.

"The boy was probably too brave for his own good," said McCall of Paterson.

"Darren came out and collected it, they've collided and Darren got the ball.

"I didn't see a great deal in it. He was all right, he was up and running. He's a brave lad, the young lad Paterson."