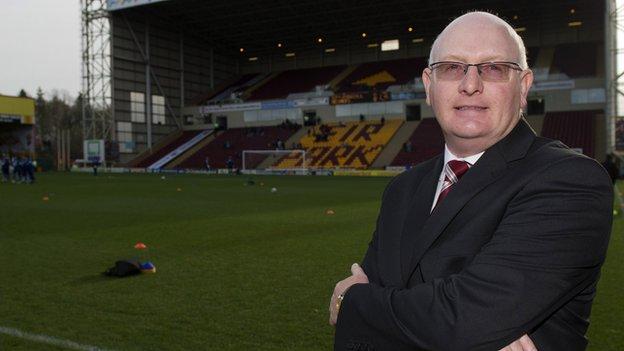 Hearts manager John McGlynn insisted he was happy with a point as defences came out on top against Motherwell.

In a game of few chances at Fir Park, the 0-0 draw sees them make it three games unbeaten in the Scottish Premier League.

For McGlynn, keeping the opposition at bay was key.

"If you make sure your opponent's scoreline reads zero then you've obviously got a chance of winning the game at the other end," he said.

"It was a hard-earned point for us. We had to ensure we didn't open up and give early ammunition to Motherwell.

"There wasn't too much goalmouth action but defensively we were very good. I thought we stifled them very well."

"We've got to take the positives from that and we've found it difficult here in the past. A point's not a disaster."

The first half yielded the best goal-scoring chances with Darren Randolph palming away an early Ryan Stevenson drive.

Hearts' goalkeeper Jamie McDonald was called upon too, tipping over expertly from Michael Higdon's header after an excellent Chris Humphrey cross.

McGlynn feels he has a strong squad at Hearts, but that they are possibly missing having an out-and-out goalscorer.

"I think that's been the case most of the season. That is something that we continually work on all the time.

"Hopefully, if we keep getting good possession of the ball and getting into good areas we can get the final ball into the box that we can finish off."

One spot of controversy centred around 'Well 'keeper Randolph, who appeared to kick out at Hearts forward Callum Paterson when collecting a bouncing through-ball.

No action was taken against Randolph.

"I've only seen it as it happened, I've not seen a replay, but it seemed like there's a leg where there shouldn't have been," said McGlynn

"I don't think the boy was being malicious, maybe a bit mischievous.

"There was a leg in a position that wasn't natural, if you ask me."