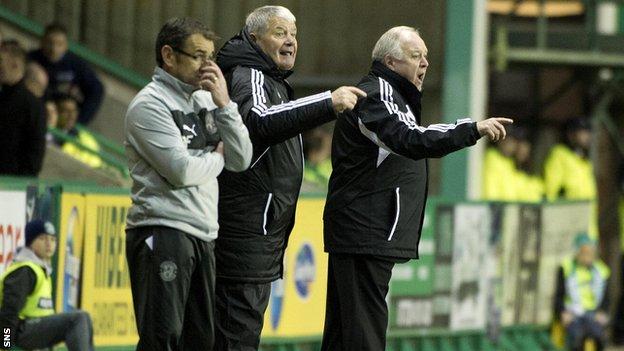 Aberdeen manager Craig Brown gave in-form Niall McGinn a pat on the back after a narrow win at Hibernian moved his side to second in the league.

"You give Niall McGinn a chance and he's very nippy, quick and lethal in front of goal," said Brown.

"It's pleasing for him to get the goal because he works so hard when he's not scoring."

Aberdeen have not lost in six visits to Leith and Brown was particularly satisfied with this one given his depleted squad.

"We started seven first-team players short then we lost one during the game in Isaac Osbourne," said Brown.

"So to come here and play in as determined a fashion against Hibs and get a very good goal, I thought we deserve a bit of credit.

Hibs' striker Eoin Doyle had the best chance of the first half when his dipping, first-time shot from 22 yards was pushed round the post by the fingertips of Jamie Langfield.

And the home side threatened again early in the second half, when Leigh Griffiths' overhead kick brought out a fine one-handed save from the Aberdeen 'keeper.

But it was the visitors who netted the crucial goal when McGinn coolly finished off a cross from Johnny Hayes on 77 minutes.

"Hibs played well and I wouldn't dispute that," said Brown.

"They had a lot of the pressure in the second half, hammering balls into the box.

"The goalkeeper and the two centre-backs did a really good job for us."

With Celtic losing on Saturday, Aberdeen could go clear at the top of table if they beat Inverness CT on Tuesday.

Brown is reluctant to talk up his side's title chances but assures everyone he is quietly optimistic about Aberdeen's credentials.

"There's no more positive person than I am, but I keep it quiet," said Brown.

"I'm positive in the dressing room. I'm not going and shouting publicly what we're going to do.

"The lads in the dressing room will tell you there's never a negative thought in my head and there never has been in any of the teams I've managed.

"I'm particularly optimistic about this team when we get everyone back fit - we will be a match for anyone in the SPL."