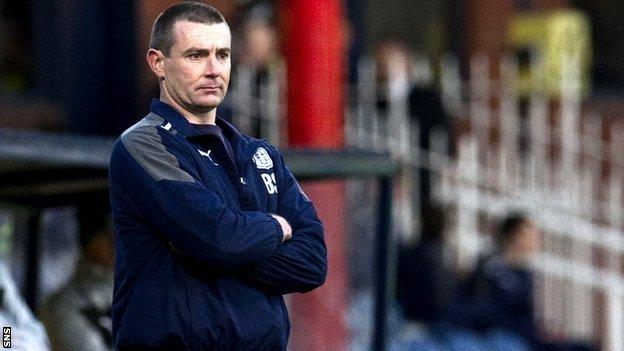 Dundee manager Barry Smith insists defeat by fellow strugglers St Mirren will not have a significant bearing on their fight against relegation.

The Dens Park side lost 3-1 to the Buddies to fall four points behind the Paisley side at the bottom of the Scottish Premier League.

But Smith maintains the fight to avoid the drop will last the season.

"There is a long way to go. This game isn't going to determine anything," he told BBC Scotland.

"It would have been good psychologically for the players to get a victory and get off the bottom of the league.

"We've got tremendous confidence in the dressing room - it does take a dunt every now and then - but that's up to us to pick them up and make sure they're ready for a fight right to the end of the season.

"We've got enough belief and ability in the dressing room to make sure that we stay in this division."

And the Dens Park boss defended striker Colin Nish, who was sent off for a high challenge on St Mirren defender Paul Dummett in the first half.

"I'll need to see it again, but knowing Colin, he's not got a bad bone in his body. I find it hard to believe that he should be sent off for it.

"But I can only make that decision when I've seen the video footage again.

Smith said he was pleased by the way his side came back to level the match after the sending off of Nish.

"I'm delighted with the way the boys went out in the second half," he said.

"For 25 minutes, they more than handled St Mirren and limited them to very few chances.

"To get back in was great for us, but the really pleasing thing was how hard they worked.