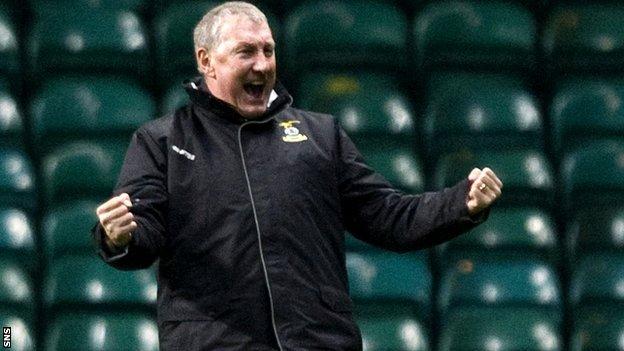 Inverness CT manager Terry Butcher hailed his side's first away victory over as Celtic as "magnificent".

The Highland side claimed all three points courtesy of Billy McKay's second-half strike.

And Butcher insisted that the longer the game went on, the more he though his side would win.

"The longer the game went on and Celtic hadn't scored, we knew we had a chance and felt we could do something when the game stretched," he told BBC Scotland.

"As far as I could see that was Celtic's strongest team they put out today, which shows respect for us, and we've matched them - which is a magnificent achievement for us."

And the result offered some form of redemption for Butcher and his side after a 5-1 defeat by Motherwell the previous week.

"It looked a different team from last week," he said.

"Today I thought we played very well. The more the game went on the better we looked on the break."

Butcher was particularly delighted by success in Glasgow after knocking Rangers out of the Scottish League Cup at Ibrox.

"It's just a wonderful experience to come to Glasgow twice, beat Rangers and then beat Celtic," he said. "It's a magnificent double.

"Like with the Rangers match, we wanted the players to handle the occasion and just concentrate on one thing, which was stopping Celtic."

Butcher revealed that the only player in his squad who had previously won at Celtic Park was Aaron Doran.

"It was in a pre-season match when he was at Blackburn," said Butcher. "He actually scored in that match, so he was able to tell everyone what it was like to win here.

"Now they can tell everyone else, just what is that feeling."