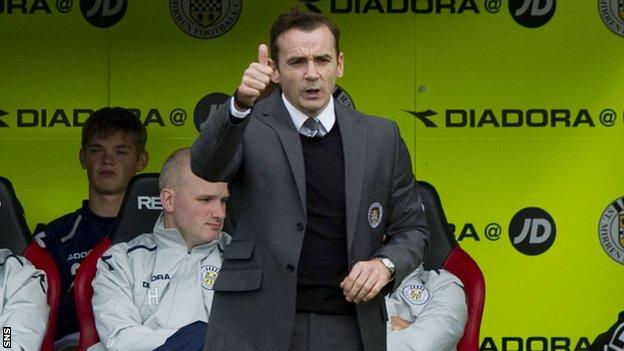 Two Stephen Thompson goals and a late third from Dougie Imrie put the 10-man visitors to the sword.

"There was a real hunger in the players' eyes," said Lennon. "You could see before the game that they were itching to get out there.

"I know you get the same three points but the manner in which the boys went about their business was great.

"The commitment from the boys from the first minute was terrific and they got their rewards today."

Dundee were reduced to 10 men when Colin Nish was shown a straight red card for a challenge on Paul Dummett when the match was still goalless.

"I thought we handled everything Dundee threw at us. Hopefully we can now kick on from this," said Lennon.

"This group of players are certainly better than what their current league position shows -but you can't hide from what the table is reflecting.

"Words become cheap unless you turn them into actions and we did that today."

Lennon was keen to acknowledge the contribution of Imrie in particular.

"It was a great finish," said Lennon.

"You could see when the team was selected that he was disappointed not to start and I totally expect that.

"But what a contribution and that's exactly what you want from your subs. You want them to take the disappointment on the chin, to be supporters, get behind the team but, more importantly, when called upon, have an important impact to make.

"He looked a constant threat, he looked like the Dougie Imrie of old, where he was positive and getting at people and getting an end product. Long may that continue."