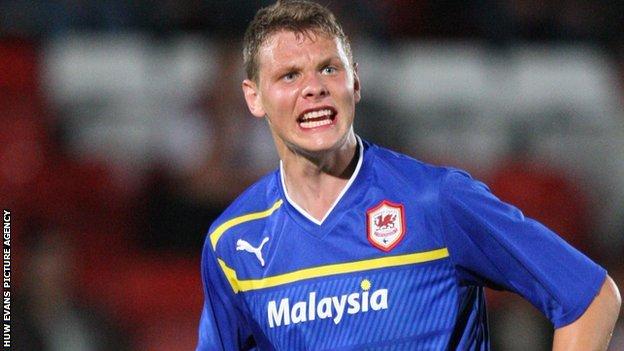 Nugent marked his first league start with a goal and then withstood late pressure to help protect a 2-1 lead.

The 19-year-old had already been tipped as a future Cardiff captain by Mackay after an assured league debut as a substitute last Saturday.

"He's got such a calm demeanour," said Mackay.

"The lad desperately wants to learn - you can see that every day.

"Since day one of pre-season he's improved and he's listening to good people around him, as well as the coaching staff."

Injuries to defenders Ben Turner, Andrew Taylor and Kevin McNaughton have forced Mackay to throw Nugent into the team.

But the manager says the 6ft 4in centre-back has already vindicated the decision to give him his chance.

"If he keeps wanting to improve and learn like that he's going to be potentially very good for this football club," added Mackay.

The defensive crisis had promoted Mackay to sign Simon Lappin on loan from Norwich City.

Lappin started against Barnsley, but his debut was tarnished by a late dismissal for two yellow cards.

His automatic one-match ban provides another headache for Mackay before Tuesday's match at Derby County, but he stressed Lappin should never have been shown a second yellow card.

"I know nothing can be done about that but I'm so disappointed because I've seen plenty of other fouls in the game that didn't merit a booking and that was the exact same," he said.

"It really did put us under unnecessary pressure. I'm disappointed in the referee."

Cardiff's 10 men survived the final five minutes despite Barnsley's late revival to give Mackay only his third away win of the season, ending a run of three successive defeats on the road.

"I was delighted with the performance," he said.

"If we had been more clinical we wouldn't have given ourselves that tough few minutes when Barnsley threw everything at us.

"But we defended resolutely. The conditions were dreadful and we took out chances."