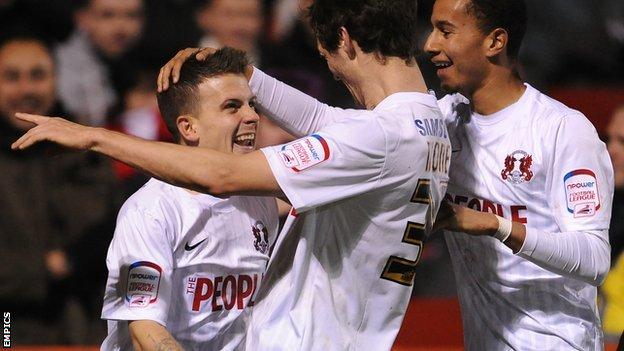 Two goals apiece from Dean Cox and David Mooney gave Leyton Orient a win against non-league Alfreton Town in the second round of the FA Cup.

The Reds went ahead when Paul Clayton finished from a Danny Meadows pass before Cox curled home an equaliser.

Mooney then scored twice, volleying in Orient's second from six yards and heading in Lee Cook's cross for 3-1.

Ben Tomlinson pulled one back with a shot on the turn before Cox sealed the victory after linking up with Mooney.

In a pulsating cup tie, Blue Square Bet Premier side Alfreton were unlucky not to make it 3-3 when Josh Law's direct free-kick hit the crossbar and Cox scored Orient's fourth goal only four minutes later.

The O's, who have now won their last six games and are 13th in League One, have an away tie at Championship club Hull City in the third round of the FA Cup in January.

"I thought that we dominated the game from the start. Then we had a 15-minute spell where it cost us and after that I think we dominated again.

"I think we came out second half and dominated. We got caught at the end but we were having a go for it then.

"All in all I think it was positive but like I've just said to them in there, 'the higher you go the better decisions you have to make'."