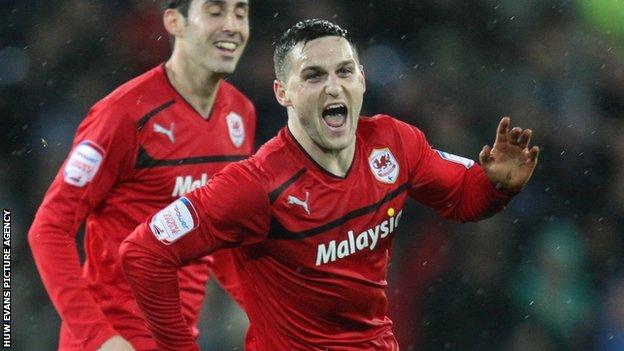 Cardiff City made it a perfect 10 home wins out of 10 in the Championship this season against former manager Dave Jones's Sheffield Wednesday.

Craig Conway's first goal of the season lifted the Bluebirds back to the top of the table above Crystal Palace.

But Wednesday are second from bottom after a run of six League defeats in which they have scored only twice.

The Owls offered stiff resistance against a dominant City, but finally conceded 10 minutes from time.

Wednesday boss Dave Jones was returning to the ground for the first time since leaving the Bluebirds last year after six years in charge.

But his entrance failed to produce much of a response from the home crowd, and he watched the Owls stage a battling rearguard action.

By contrast his successor at Cardiff, Malky MacKay, saw his team set a club record for successive home wins in the League.

After a sunny weekend in the Welsh capital, the match kicked off in dull conditions with a light rain giving the surface a little extra zip.

Craig Bellamy laid on an early opportunity for Andrew Taylor who fired over from close range, but a Hudson foul on Chris O'Grady handed a chance to Wednesday but Miguel Liera fired the free kick into the Cardiff wall.

The Bluebirds quickly established complete control, though, forcing three corners in the first 17 minutes, but they failed to test Kirkland.

But the visiting goalkeeper had to be on his toes in the 25th minute to keep out a sharp shot from Jordon Mutch.

Wednesday's former Swansea City striker Mamady Sidibe limped off in the 34th minute to be replaced by Gary Madine.

For all their first half dominance, Cardiff failed to hurt the Owls, who held the Bluebirds at bay - much to Bellamy's irritation.

The Welsh international was given a lecture by referee Graham Scott just before the interval after giving vent to his feelings rather too vehemently.

Cardiff's domination continued after the break when Helguson set Bellamy clear, but then failed to hit the target when Bellamy returned the compliment.

And the home side were lucky not to be punished for failing to take advantage of their dominance when Madine was put through but saw his shot saved by David Marshall.

Rudy Gested replaced Heidar Helguson in the 70th minute, and almost made an immediate impact, but headed wide from close range under pressure from Liera.

Cardiff finally got the breakthrough in the 80th minute when substitute Joe Mason nodded the ball back into the path of Conway just outside the box.

The former Dundee United winger controlled the ball on his right knee before firing a left-footed shot into Kirkland's bottom right-hand corner.

The goal finally sparked the Owls into life, but two corners in added time failed to produce an equaliser.

Cardiff City manager Malky MacKay told BBC Radio Wales: "It was always going to be a tough game for us, a team that's bottom of the League playing a team that's at the top, and if we'd gone in with the wrong frame of mind we could easily have got beaten today.

"I thought we applied ourselves right from the start, we knew they were a tall team, a big team that would come and try to apply pressure at set-pieces. But I thought we dealt with that really well.

"Craig's [Conway] had to wait for his chance and I thought he was great today."

Sheffield Wednesday manager Dave Jones told BBC Radio Wales: "That's happened to us too many times this season where they've worked hard, but [it's] that lapse of concentration at certain times of the game.

"We knew what they were going to do, they were going to pummel our box and look for knock-downs and the only time that we've switched off probably in the whole of the game, they've laid it off and we didn't get out quick enough to block it.

"I think they need a little bit of luck, but you've got to earn that. I think today they were doing that for 80 minutes or whatever it was and then they've scored. It's just that one lapse."