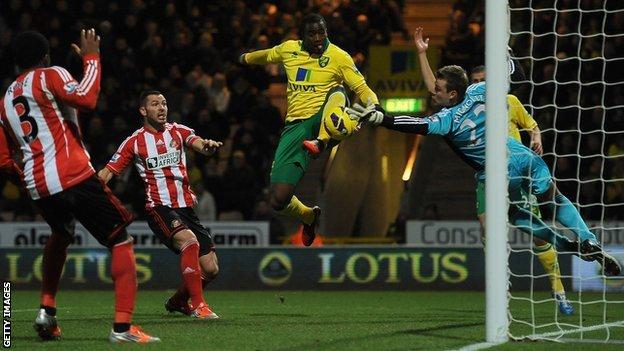 The pressure increased on Sunderland manager Martin O'Neill as his side were left a point above the Premier League drop zone following defeat at Norwich.

The Canaries went two up when Sebastien Bassong forced in a shot and Anthony Pilkington scored with a low strike.

Craig Gardner pulled one back but the visitors then wasted a chance to level.

Gardner's free-kick hit the post and the ball fell to Matt Kilgallon, who shot over the bar from 10 yards out with an empty net in front of him.

Another Gardner shot was cleared off the goal-line by defender Javier Garrido and Canaries keeper Mark Bunn denied Stephane Sessegnon and Danny Rose as the home side held on for the win.

This was a fourth successive home victory for Norwich, following wins against Arsenal, Stoke and Manchester United, and their unbeaten run in the league now stands at eight games.

While Sunderland's defeat leaves them precariously placed, O'Neill will take heart from an improved second-half display ahead of testing fixtures against Chelsea, Manchester City and Manchester United.

"Sunderland did everything in the second half but they did not make the most of their chances. Norwich were the better side in the first half and Anthony Pilkington ended up getting the winner."

But the Black Cats boss will not want a repeat of the grim form they showed during the first half and which ultimately left a side with just two wins from 22 Premier League games with too much to do at Carrow Road.

It was little surprise when the visitors began with the lack of confidence and self-belief their poor form suggested, and Norwich were quick to capitalise.

Robert Snodgrass curled in a free-kick which was inadvertently flicked on by the arm of Sunderland defender Carlos Cuellar before Bassong arrived at the far post to score from close range.

And, when Pilkington latched on to a Bradley Johnson pass to surge forward, cut inside Cuellar and drive in a low shot past keeper Simon Mignolet, O'Neill must have feared the worst.

Sunderland rarely looked like scoring, although they did get on the scoreboard when Gardner curled a low 18-yard shot past Bunn on the stroke of half-time.

The visitors came out rejuvenated after the break, with Connor Wickham replacing injured striker Steve Fletcher.

Pilkington had a shot palmed away by Mignolet at the other end but Norwich were on the back foot for most of the second half.

Some last-ditch defending helped keep Sunderland at bay though, while keeper Bunn also played his part as he saved strikes from Sessegnon and Rose.

"I thought we were excellent in the first half and it is difficult to sustain that over 90 minutes, particularly with it being the third game in a week.

"We haven't made any changes to the team so to sustain that for 90 minutes is tough and of course their goal gave them the lift they needed.