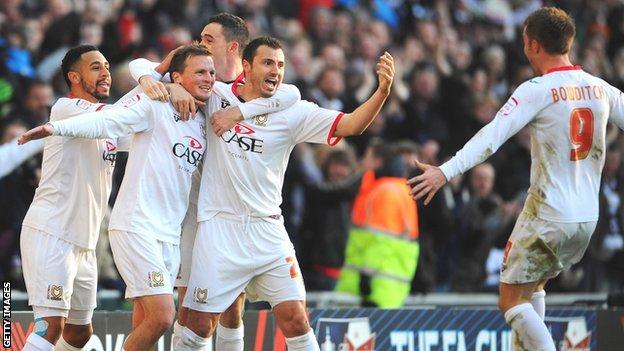 MK Dons stunned AFC Wimbledon with an injury-time winner to triumph in the first meeting between the sides and book a place in the FA Cup third round.

Stephen Gleeson's superb strike broke the deadlock for the hosts in a game that was struggling to match its hype.

AFC levelled when Jack Midson headed in a rare attack for the visitors, as travelling fans ran on to the pitch.

2000: Wimbledon are relegated from the Premier League.

2001: Wimbledon announce their intention to relocate to Milton Keynes.

2002: AFC Wimbledon are formed by fans who are furious at the proposed move and the club begin life in the Combined Counties League Premier Division, playing at Kingstonian's Kingsmeadow ground.

2003: With the club in administration, Wimbledon move to Milton Keynes, taking up residence at the National Hockey Stadium.

2004: Wimbledon come out of administration and are rebranded as MK Dons and are relegated to League One in the same year. AFC Wimbledon win promotion to the Isthmian League First Division.

2011: AFC Wimbledon are promoted to League Two via the Blue Square Bet Premier play-offs - a fifth promotion in nine seasons.

2012: AFC Wimbledon announce plans to move to a stadium in their spiritual home of Wimbledon.

The fixture has been 10 years in the making, since AFC Wimbledon were formed by disgruntled Wimbledon FC fans in protest of their club's proposed move to Milton Keynes.

The move went ahead after an independent panel set up by the Football Association gave it the go-ahead and Wimbledon were uprooted 56 miles to Buckinghamshire and subsequently renamed MK Dons eight years ago.

MK and their chairman Pete Winkelman have endured criticism from most of football, being accused of ripping a club from its community and carrying around the tag of "Franchise FC".

For AFC Wimbledon, this was an opportunity to show how far they had come - how they had started in the ninth tier of English football and risen to League Two - and to remind the world there is a club that bears the Wimbledon name.

MK on the other hand had a chance to show that, regardless of how they came into existence, they are a club with designs of playing attractive football in front of a young, new fanbase.

Wimbledon performed one of the greatest FA Cup final upsets of all time when they beat Liverpool 1-0 at Wembley in 1988. MK boss Karl Robinson, a proud Liverpool fan, has admitted he cried after watching Lawrie Sanchez score the goal that handed the trophy to the Crazy Gang.

But, while both sets of supporters rose to the challenge at Stadium MK, the early action failed to match the build-up.

The most eye-catching moment in the first 30 minutes was above the pitch when a plane, chartered by AFC supporters, flew over tugging a banner reading "We are Wimbledon".

Angelo Balanta's shot wide of the post was all MK had to show for their dominance in possession.

It was no surprise when the League One side went ahead but the nature of the goal was out of keeping with the game up to that point. Gleeson's stunning 25-yard effort flew into the top-right corner and put the hosts ahead on the stroke of half-time.

MK would have expected an instant reaction from AFC after the break but could have been out of sight themselves, with Sullivan, who played 224 times for the old Wimbledon, getting a hand to Ryan Lowe's close-range effort and Dean Bowditch shooting into the side netting with the goal gaping.

"When Wimbledon scored their goal you would have expected MK to change but they were slow and predictable. They were going backward and sideways with their passes too often. They didn't do anything quicker and it looked like Wimbledon would get their draw, in fact Wimbledon had a great chance to win the game. But that is Cup football."

The AFC response came from a rare burst forward when Toby Ajala's cross was nodded in tidily by Midson.

His celebrations were accompanied by a crowd of AFC supporters who had streamed on to the pitch, letting 10 years of emotion get the better of them in unsavoury scenes that were quickly calmed by stewards.

It was a series of events that raised the atmosphere in the ground from tense to boisterous and both sides reacted, feeling the urgency and the desire of their supporters to claim a memorable victory.

Ryan Lowe thought he had done just that for Robinson's side but his celebrations were cut short by an offside flag against Zeli Ismail, who had laid on the chance for the striker.

The League Two side then had a great chance of their own but Steven Gregory was unable to beat David Martin, another former Wimbledon keeper, when one-on-one having capitalised on Darren Potter's mistake.

And, just when it looked like a replay and a quickfire second encounter was on the cards, MK stole it in the dying minutes.

AFC failed to fully clear an MK corner, Ismail struck a shot into the ground that Otsemobor flicked his leg against and turned to see the ball loop over a helpless Sullivan.

A few MK supporters failed to resist the urge to celebrate on the pitch, but, when order was restored, Robinson's side managed to stand strong against a late onslaught to treasure a satisfying win and leave their opponents desolate.

"It's been a tough week. It's been enjoyable but it's also been difficult.

"I thought the game typified two sets of teams with great hunger and passion for the club they play for. Two teams can walk away from this stadium very proud of each other.

"I wanted this game to go smoothly, I wanted it to be conducted in a manner that was right for the English game and I thought we all did that.

"Maybe I got a bit excited with the goal at the end but I'm not going to apologise for that.

"I love this club and the players who wear our shirt. I'm sure you'd rather see me celebrating like a lunatic than just stood there with a stone-face smile."

"I've got mainly pride. Pride for the players. We worked hard on a game plan and we felt it was the best way we could cause an upset. Every single player to a man carried those instructions out.

"They got a great first goal and a bizarre second. But we were inches from going in front so we can't ask any more than that.

"My main fear was not doing the fans proud and I can sit here now, despite hurting from the defeat, and say we did that.

"We knew we would end up having very little possession. We knew we couldn't press them high up the pitch because they play between the lines very well.

"The game plan went to a tee but we were hoping for that stroke of luck and perhaps that wasn't with us."