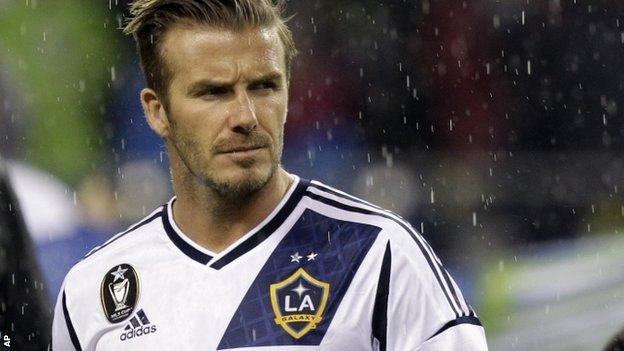 Harry Redknapp believes David Beckham could still play in the Premier League and has not ruled out trying to sign the former England captain for QPR.

Beckham, 37, is leaving Los Angeles Galaxy in December and has been linked with a move to the Hoops since Redknapp took over as manager on Saturday.

"I've not discussed it with the chairman so we'd have to look at that."

Redknapp tried to sign Beckham on loan in January 2011 when he was manager at Tottenham but the midfielder was only able to train with the north London club.

"He's a top fantastic player," continued Redknapp. "We had him training at Tottenham and it was amazing [to have him] round the place. He is absolute class.

Where next for Beckham?

"The 37-year-old is weighing up a slew of offers from France, Australia, the Far East and others in the United States. Beckham's appetite for the game remains and so, it would appear, does the desire from all corners of the globe to offer him multi-million pound contracts."

"David could still be a great asset to anyone. Just having him round the place, showing people how to train and look after yourself. His professionalism is second to none."

Beckham announced last week that he was ending his six-year stay in Major League Soccer with LA Galaxy after the MLS Cup final on 1 December - he helped his side win the Cup in 2011.

In a statement, he said that he wanted to "experience one last challenge before the end of my playing career".

Australian side Melbourne Heart have claimed they are in talks with the former Manchester United, Real Madrid and AC Milan player.

Beckham, who won 115 England caps, a record number for an outfield player, has also been linked with moves to Paris St-Germain, Brazil, China, Russia and Qatar.

Redknapp was at Old Trafford on Saturday afternoon to watch his new side open the scoring against Manchester United before going on to lose the game 3-1 and stay bottom of the Premier League with four points from 13 matches.

QPR are yet to win a league game this season and Redknapp is acutely aware of the challenge he is facing at Loftus Road.

"We've got to get cracking pretty quickly," he said, immediately before taking his first training session in west London on Sunday. "The target is [to finish the season] fourth from bottom.

"We've just got to get out of trouble. We've got to try and survive. Four points from 13 games makes it difficult but we've got to do it."