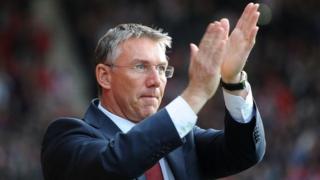 Southampton manager Nigel Adkins says his players are "improving all the time individually and as a team" after they beat Newcastle 2-0 at St Mary's Stadium.

Gaston Ramirez and Adam Lallana were on the scoresheet as Saints secured back-to-back Premier League victories to move out of the relegation zone.

Adkins was particularly pleased with his side's first clean sheet of the season, which he called "reward for all their hard work".