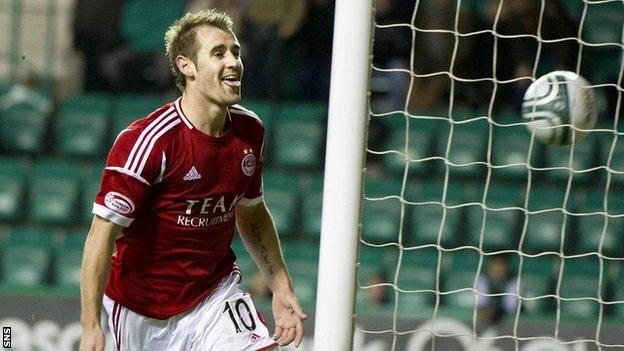 Saturday's match at Easter Road was widely billed as a "best of the rest" contest.

After all, Hibernian and Aberdeen occupied second and third spots in the Scottish Premier League and we are a third of the way into the season.

With a fine second-half goal from Niall McGinn earning maximum points for the Dons, the visitors leapfrogged the hosts.

So, a quick look at the table tells us Aberdeen are now better than Hibs.

Jamie Langfield made two great saves and was kept busy throughout a lively second half, while his opposite number Ben Williams did not get his gloves dirty.

Craig Brown's team have played better this season and lost - at Ross County, for example.

And Hibs have played worse - against St Johnstone and St Mirren - and emerged victorious.

What we have, then, is a wildly unpredictable top flight that makes picking winners next to impossible

Just to confuse matters further, reigning champions Celtic, tipped to defend their crown at a canter, lost at home to Inverness and have taken just five points from their last five league outings.

What we have, then, is a wildly unpredictable top flight that makes picking winners next to impossible.

While that may wreak havoc with punters' fixed odds, and the quality of fare may be patchy, it is undeniably exciting.

With Rangers out of the picture and Hearts ailing after years of spending beyond their means, Aberdeen and Hibs are very well placed to be the best of the rest, maybe even challenge for top spot.

Of the 11 teams chasing Celtic, only Hearts can rival their core support but the Gorgie side are hamstrung by gross financial mismanagement.

And both clubs strengthened over the summer when most were cutting costs.

McGinn and Johnny Hayes have been wise investments and the exciting prospect of Ryan Fraser complements a Pittodrie squad packed full of experience.

Hibs were able to recruit James McPake and Leigh Griffiths from the English Championship and land the likes of Tom Clancy, Paul Cairney, Tom Taiwo and Ryan McGivern.

Griffiths was full of running and invention but could not add to his haul of 13 SPL goals.

His strike partner Eoin Doyle had an off day and a lack of attacking menace from midfield must concern manager Pat Fenlon, with Griffiths's services only secure until the end of the year.

Langfield may have done much to frustrate Hibs and McGinn was the goal hero but the rock on which Aberdeen's weekend success was founded was Russell Anderson.

The 34-year-old skipper is always a cool head and he rarely put a foot wrong at the centre of a three-man defence.

If Anderson can stay in good shape and Stephen Hughes and Gary Naysmith return to the fold following injuries, the Dons can be confident about remaining at the top end of the table.

For Hibs, keeping the in-form Griffiths appears essential for their aspirations.

But Kilmarnock, in eighth place, are a mere five points behind Aberdeen and Hibs and, as this campaign has proved time and again already, predicting form has been head-scratchingly difficult.

The only safe bet is that there are a few more thrilling surprises to come.

82 comments
Back to top
unknown