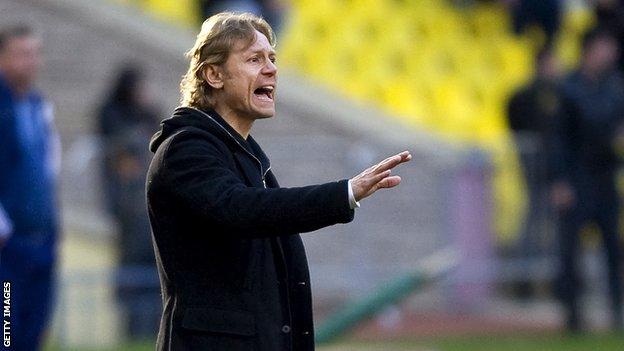 The 43-year-old takes over for a second coaching stint at the club until the end of the year.

Spartak were eliminated from the Champions League last week when they lost 3-0 at home to Barcelona and Benfica beat Celtic 2-1 in Lisbon.

They visit Celtic Park on 5 December with the hosts needing to better Benfica's result in Barcelona to progress.

Neil Lennon's side secured their first away win in the Champions League group stages in October.

Emery was Spartak's manager for less than half a season.

Former Russia international Karpin had a distinguished playing career with Spartak and Spanish clubs Valencia, Real Sociedad and Celta Vigo but had no coaching experience before becoming general director at the Moscow club in August 2008.

Eight months later he fired now-Swansea boss Michael Laudrup as coach and took over himself.

The Russian side currently lie seventh in the their league and are 10 points behind leaders CSKA Moscow.