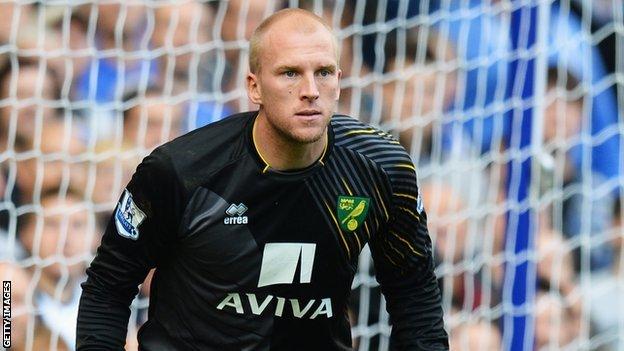 Norwich City could be without keeper John Ruddy for the short-term and defender Michael Turner "for weeks".

England international Ruddy came off with a thigh injury in while Turner missed out completely with a shoulder problem.

The Canaries face relegation rivals Southampton and Sunderland on Wednesday and Sunday respectively.

"He's going to have a scan on it. We're hoping it's not too bad. But we've known players before who can make a recovery over a short period of time.

"If we desperately needed him to carry on on Saturday then he could have done but we didn't want him to make it any worse."

Ruddy, 26, who has conceded just two goals in his last six appearances, had been a doubt for the trip to Goodison Park because of a knee complaint but was passed fit to feature.

He was replaced by Mark Bunn, who will continue in goal should Ruddy not recover in time.

"Mark's a good goalkeeper," said Hughton. "If it's a case that he comes in for whatever period of time then we have no fears about that."

"We're assessing Michael and we are hoping it will not be a while," said Hughton.

"It is certainly not going to be a longer-term one but possibly a matter of weeks. Whether he has any chance for Saturday, I don't know at this stage."