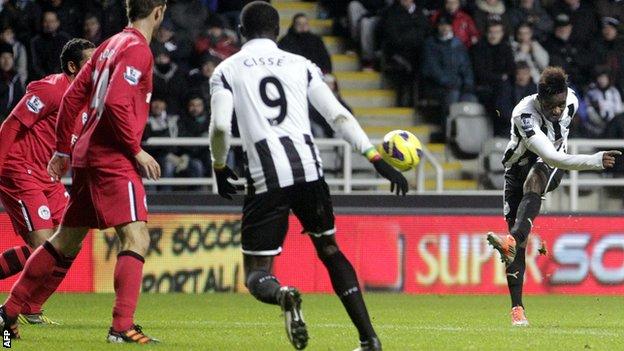 Latics defender Maynor Figueroa was sent off in the 12th minute after he brought down Papiss Cisse in the box.

Ba smashed home the penalty and added a second eight minutes later when he pounced on an Ali Al-Habsi spill.

Wigan tried to fight their way back into the game but Gael Bigirimana wrapped up the win with a spectacular third in the 71st minute.

Roberto Martinez's side have now lost four of their last five games and are just two points above the relegation zone.

The visitors had started the game brightly and tried to put a nervy Newcastle under pressure with a couple of early snapshots, although they failed to trouble home keeper Tim Krul.

But home anxieties were eased in the 12th minute when Cisse was forced off the ball by Figueroa as he darted onto a clever pass from strike partner Ba, and referee Mike Jones immediately pointed to the spot before producing a red card.

Ba tucked the penalty beyond Al-Habsi and, before 10-man Wigan had properly reorganised, he then added a second.

Full-back Davide Santon cut inside and hit a fierce 25-yard strike, which Al-Habsi could only parry straight to the feet of Ba, who tapped the ball into the empty net.

Roberto Martinez reacted by replacing attacking midfielder Jordi Gomez with James McArthur in an attempt to stem the home attacks.

And the change worked as his side's slick passing had Newcastle on the back foot for long periods, despite their one-man advantage.

But the Latics still failed to seriously threaten the Newcastle goal, Al-Habsi remaining the busier keeper.

He reacted well to keep out Marveaux's 52nd-minute strike and a low effort from Bigirimana but he had no chance when the latter hit a brilliant third - his first ever goal in professional football.

The former Coventry midfielder cut inside to curl a dipping left-foot shot past inside the far post.

Ba missed the chance to complete his hat-trick, slicing his shot from close range, before limping out of the game late - the only negative on a night of huge relief for Newcastle manager Alan Pardew.

Newcastle manager Alan Pardew: "It's been difficult for the players and staff and it was nice to get a break tonight, and it was a break - we got one tonight.

"Demba loves it here. It's a football city, we've tried to take the clause [£7.5m get-out in his contract] out but we haven't been successful with that and that is difficult for us and Demba."