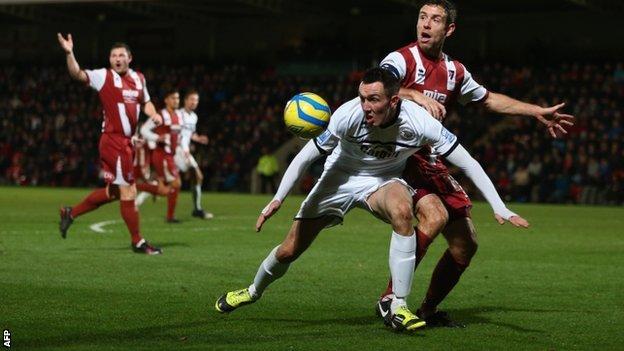 Hereford United came from behind at Cheltenham to earn an FA Cup second-round replay as both teams kept their hopes of a dream tie against five-time winners Everton alive.

Both goals at Whaddon Road came inside four first-half minutes.

Then from Ryan Bowman's cross, the Bulls' Josh O'Keefe had his header saved, but slammed home the rebound.

After that, the home side had marginally the better of the first half as Hereford struggled to come to terms with the pace of McGlashan down the right.

But the Bulls were not without menace.

Sam Clucas went on a forceful diagonal run that allowed Harry Pell the opportunity to fire just over before going for goal himself with a left-foot shot that was also slightly too high.

Clucas powered another left-foot shot over the angle early in the second half, while Mohamed twice cut in from left and was denied by Hereford keeper James Bittner

Will Evans then twice went close for the visitors, his 25-yarder tipped over the bar by keeper Scott Brown before he found the side netting with a cheeky effort from a short corner.

The replay will be played at Edgar Street on Tuesday, 11 December.

Bulls boss Martin Foyle told BBC Hereford & Worcester: "Everybody's dreaming. They can enjoy their result against a good team, but we've now got to try and go one further next week.

"Everyone knows the position we're in. But we've now got a replay to look forward to. A lot of non -league clubs are usually finished with the Cup by now. But that will keep us on a high, with another good 5,000 crowd to look forward to.

"They're a big physical side who like the long throws, but, with 1300 fans roaring us on and lifting us, there was a lot of belief and we dealt with it very well.

"The only criticism of the boys is that, when we do break into that final third, we're a bit rash at times, but that's young boys for you.

"Jermaine McGlashan was the stand-out player for them. You can see why they paid £50,000 for him and why other clubs are interested. Most of theirs are six foot two, and he's their little spark who adds that bit of quality. But, Joe Heath got a bit tighter to him second half."