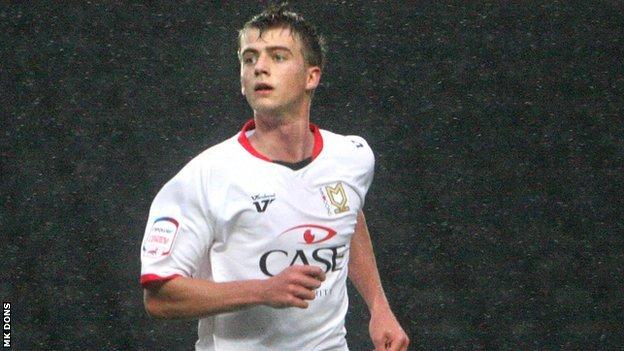 The pair made their Dons debuts in

MK Dons are the Football League's in-form side, having taken 19 points from their last seven league games.

In that time they have scored 13 goals and kept four clean sheets, conceding just three.

"There will be phone calls made to try to extend these and we'll hope to get something in writing saying we can extend them in January."

Bamford, 17, particularly impressed in his first senior game since he

The England Under-19 international linked up with fellow attackers Luke Chadwick, Angelo Balanta and Dean Bowditch to great effect, supplying an assist and winning a penalty against the U's.

"Patrick's got the number nine shirt now and he's got to keep that until his performances deteriorate," said Robinson.

"He knows that's his job and Zeli's going to have to wait because Bowditch, Chadwick and Balanta have been brilliant.

"You've got to thank the Premier League clubs that have given us a helping hand. It makes a big difference to us at this level.

"We'll play the kids. We're a good club for good young kids to come and showcase their talent."

MK are now undefeated in eight games in all competitions and have won six of their last seven league outings.

It is a run that has taken them from eighth and eight points adrift of leaders Tranmere to second and within three points of the top side.

"We've made a tremendous turnaround this month," said Robinson.

"People were doubting and questioning us. There's an awful lot of lows still to come - I understand that.

"But hopefully there will be an awful lot more highs. And with the quality you saw against Colchester, I think we need to go from strength to strength."