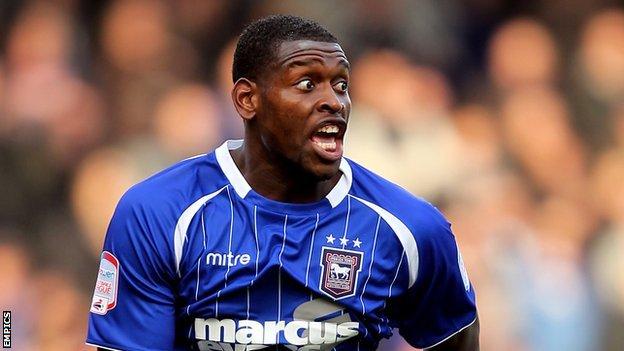 Ipswich Town boss Mick McCarthy has called on Jay Emmanuel-Thomas to improve his work rate in a bid to win a place in the side.

The former Arsenal forward - nicknamed JET by supporters - has yet to start under new boss Mick McCarthy.

Jay Emmanuel-Thomas has not started a game since 23 October - a 2-1 home defeat by Derby.

Ipswich have not won a game he has started since a 1-0 victory at Watford on 21 August.

Last season was more productive for the forward, with seven goals coming from 43 games.

"I've told him I'll call him JET when it looks like he has got a rocket up his backside. Until then it will be Jay to me."

The 21-year-old came off the bench in Saturday's 1-1 draw against Peterborough United and played in a central striker role, despite previous manager Paul Jewell often using him as a winger.

It is felt the former England Under-19 player is yet to fulfil the potential he showed as a youngster at the Emirates Stadium, despite a career that has now taken in 97 league games.

"We all know he could be anything he wants to be. He's got terrific ability and I need that out of him," said McCarthy.

"We can help him do that of course.

"We quite fancy him up the pitch as a centre forward. He's six foot three or four, a big powerful guy and he can run at people.

Town, who dropped to 23rd in the Championship at the weekend, look set to be without midfielder Nigel Reo-Coker for Tuesday's visit of Nottingham Forest and Saturday's trip to Bolton.

The 28-year-old came off against Posh with a hamstring injury and is being assessed by Ipswich's medical staff.

"They didn't think it was as bad as they first thought," said McCarthy. "But there's no chance for Tuesday. And I would think no chance for the weekend.

"But we'll let him get assessed and we'll know a bit better."