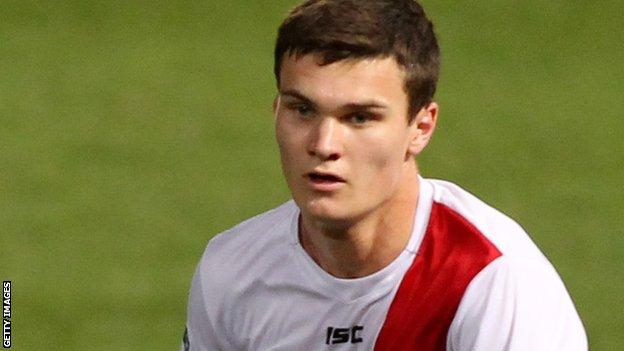 Bradford City boss Phil Parkinson has said that new signing Curtis Good was left out for Saturday's game at Bristol Rovers because of fatigue.

The 19-year-old defender joined the Bantams on loan from Newcastle until 2 January last Thursday.

"He had a bit of fatigue from some training and I didn't feel confident putting him on the bench," Parkinson told BBC Radio Leeds.

"I hope he'll be a good addition because he's a very good player."

He added: "I felt it was best to leave him for now so that he is prepared and ready to go next week."

The Australian signed for Newcastle on a six-year deal from A-League side Melbourne Heart in the summer but is yet to make his debut for the Magpies.

Fellow new signing, midfielder Blair Turgott, was named in the 18-man squad but was not called upon.

Meanwhile, Parkinson was unhappy with the nature of Nathan Doyle's sending off against the Pirates.

Doyle was dismissed in the final minute after a confrontation followed a foul by home midfielder Wayne Brown on James Meredith.

"It was a bad tackle by their player and I was stood right by it all," Parkinson continued.

"There were no punches thrown or any grappling from what I could see and I asked the referee why he had been sent off and he didn't answer me. The fourth official said he'd kicked one of their players, which I certainly didn't see.

"Doyley said he went over and had a go at the lad for the challenge but that he didn't kick him. I think the ref has made a major error there."

The club have been successful in their appeal against the the red card and Doyle will be available for Friday's FA Cup tie against Brentford.