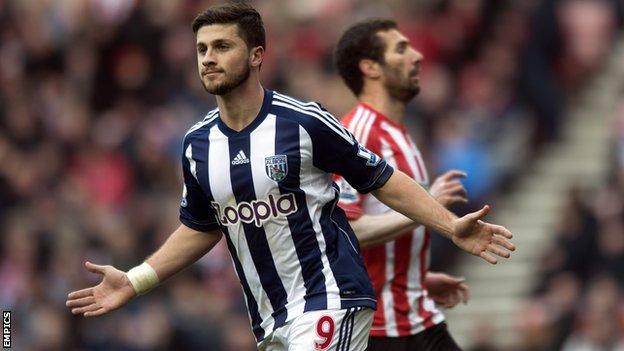 West Brom's top scorer Shane Long says the club will not get carried away after breaking into the Premier League's top three.

Albion's best run of results in the top flight in 32 years has seen them climb to within four points of top spot.

"It makes nice viewing but we're not getting carried away," he told BBC WM.

"It's good times at West Brom. The fans are very happy. But the further we go the more respect we'll get from other teams and the harder it will be."

Not since Ron Atkinson's team of the late 1970s and early 1980s were in their pomp have Albion reeled off four top-flight wins on the trot - and it could get even better if they can get something at Swansea on Wednesday night and at home to Stoke City on Saturday.

"Maybe we can win five or six in a row then see what happens," Long told BBC WM, after Saturday's 4-2 win at Sunderland.

"Swansea are a good passing team too and that should make it a good game to watch.

"We know we'll get nothing easy.

"But, if we work as hard as we did when we won at Wigan and at Sunderland on Saturday then we'll have a chance of winning."

If free-flowing football is likely to be on show at the Liberty Stadium, the visit of Stoke to The Hawthorns does not appear quite so appetising for Steve Clarke's side.

Until Albion won 2-1 in the last minute at the Britannia Stadium in January, they had not beaten Tony Pulis's Potters in 10 attempts - and they have not beaten Stoke at home in nine years.

But Long, who has scored in successive Premier League games for the first time since starting his Albion career with goals against Manchester United and Chelsea last season, insists confidence is everything.

"We have that confidence going forward," he said. " We believe we can score in every attack.

We're confident on the ball and that shows on a Saturday. We go into every game feeling we can win

"We play good football, we're hard to play against and that's a recipe for good things.

"The manager's a very good coach. We learn something new from him on the training ground every day.

"We're confident on the ball and that shows on a Saturday. We go into every game feeling we can win.

"We went to Sunderland with a bit of confidence that we'd get three points. We knew that, if we played our football and believed in ourselves, we could get something."

Republic of Ireland international Long has made a reputation for himself as a hard-working striker since signing for Albion for £6.5m from Reading in the summer of 2011.

But, with four in his last eight starts, he has now added goals to his game too - and Saturday's classic piece of poaching at the Stadium of Light, cheekily chasing down Sunderland keeper Simon Mignolet, was his most satisfying yet.

"I've made it my mission to keep closing down as you never know what can happen," he said. "And it paid off for me."