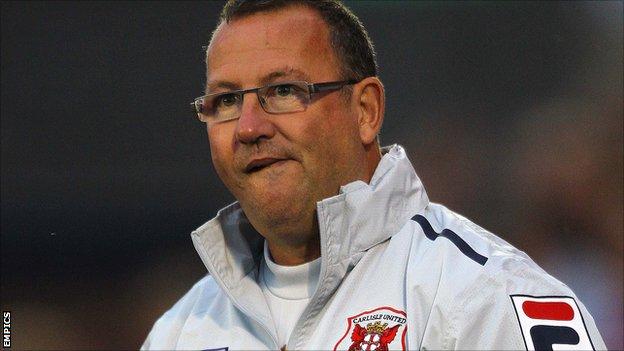 Carlisle United manager Greg Abbott has praised the efforts of his younger players after the club picked up a first win in five league games.

Abbott picked out Mark Beck, Dave Symington and Brad Potts after an impressive 3-1 victory at Yeovil.

"The young players are a huge bonus for us," Abbott told BBC Radio Cumbria.

"We've seen some big individual performances and that was important. We needed the win and now we want to build on it."

Carlisle United in League One this season

The win lifted the Cumbrians four points clear of the League One relegation zone, and Abbott said it showed the squad are good enough to continue climbing the table.

"Defensively we were much more solid, [goalkeeper] Adam [Collin] has been brave and he's come for things, made his blocks and made his saves.

"I think the run Joe [Garner] is on shows why we wanted to keep him here. Danny Livesey and Mike Edwards were fantastic and they got some really good cover from the midfield four.

"We've told Mark Beck to look at how Joe Garner does things and he put himself about and made himself a nuisance.

"He also got his first league goals and that will be something which should give him a huge boost. Dave Symington has that level of unpredictability about him and he did some good things.

"Brad Potts was immense in midfield for us and put in an unbelievable shift. It's looking good but they all know they still have work to do. With these lads and with the players coming back from injury we think we're going to have a nice little unit."

United's next two games are at home, against Bournemouth in the second round of the FA Cup and in the league against promotion favourites Sheffield United, and Abbott acknowledged it will be vital to improve a record of just two wins and six defeats in 10 league matches at Brunton Park.

"Unfortunately our best performances have come away from home and that's something we know we have to get right," he said.

"People will judge us on what they see and we have put on some horrible performances at home. We're better than that and hopefully we'll push on from here."