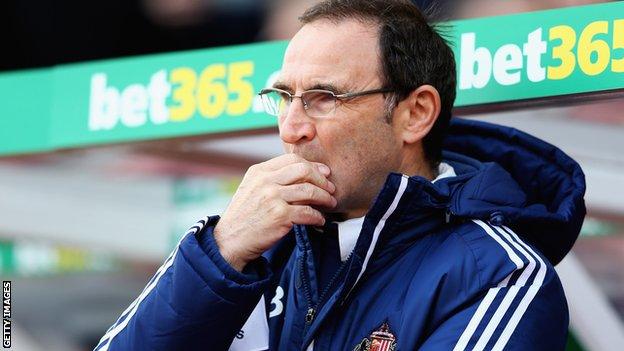 Sunderland manager Martin O'Neill has dismissed Twitter rumours that he offered to resign.

The Black Cats slumped to a third defeat in four league games on Saturday after losing 4-2 at home to West Brom.

Sunderland on the slide

Having won five of their opening six Premier League games of 2012, the Black Cats have recorded victories in four of the next 26.

That left them two points and two places above the relegation zone, and there were suggestions that O'Neill had offered to quit.

But he said: "Anyone can go on Twitter and say what they like. It's the name of the game, I accept this."

When asked if he was planning to leave the club, he said: "Absolutely not".

The 60-year-old celebrates his first anniversary in charge at the Stadium of Light next week having signed a three-year contract last December.

He was appointed to replace Steve Bruce, who was sacked in November 2011 after a torrid run of results.

But his team have only won twice so far this season and sit two points above the relegation zone.

Despite their precarious position he does not think the fixture with QPR is a "must-win" game.

He said: "We have got a fairly lengthy time to go. It's an important game, it's every bit as important as the game against West Bromwich Albion, and the one against Fulham, of course.

"It would be nice to win the match. I wouldn't say it's going to define everything, but all games are important."

O'Neill will also be the first manager to come up against Harry Redknapp as QPR boss and the Sunderland manager is cautious of a team under the effect of a new manager, even though they are the league's bottom club.

"We are not capable of treating anybody lightly, far from it. We are not good enough to do that at all.

"But in many aspects with him coming in, it's a game for us that we know now the players' concentration has to be absolutely at its height, " he said.