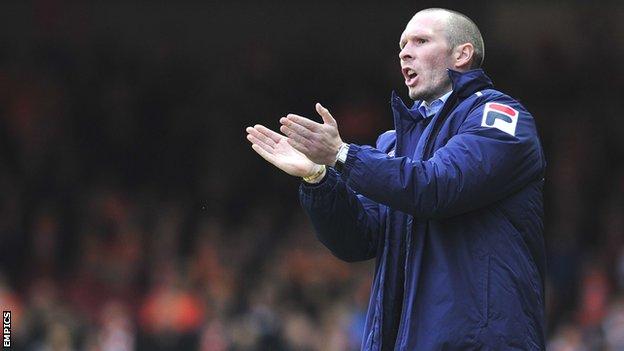 Manager Michael Appleton has urged his Blackpool team to start games better after they came from 2-0 down to draw with Watford on Saturday.

The Seasiders have come from behind to draw in all three of their Championship games since Appleton took charge.

He told BBC Radio Lancashire: "The second half was as good as I've been involved with in the last 12 months. It's a pity we didn't start that way.

"That's the biggest thing we need to sort out very quickly."

The Seasiders have conceded the first goal in all three games they have played since Michael Appleton replaced Ian Holloway as manager, but have come back to draw all three matches.

The former Portsmouth boss continued: "We gave ourselves a mountain to climb, but we had probably 90% of the possession in the second half and got the point we deserved."

With his side trailing by two goals at Bloomfield Road, Appleton made early changes to his team.

He brought on Tiago Gomes for Elliot Grandin after half an hour and then replaced Ludovic Sylvestre with Isaiah Osbourne at half-time.

The changes paid off, with midfielder Osbourne netting an injury-time equaliser, but Appleton says the game was further proof that he needs to reduce the size of his squad in the next few months.

He continued: "I like to think I'm reasonably honest and my assessment is that there's no wonder we've got so many players at the football club.

"When you have so many players, you're almost expecting them to - I wouldn't say let you down - but not be as resilient week in, week out.

"When you've got a squad of quality rather than quantity, you expect them to perform for you every game.

"I want to bring a resilience to the club, where people have respect once they've got the shirt and they don't want to let it go. Hopefully that will come over the next few months."