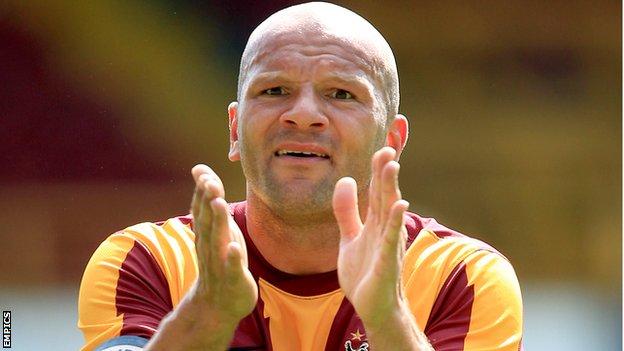 Bristol Rovers defender Guy Branston says he was pleased to gain revenge over former club Bradford by scoring against them on Saturday.

Branston, 33, left the Bantams over the summer after just one season.

He is on loan at Rovers from Aldershot and scored 79 seconds into his Pirates debut, which finished 3-3.

"I wanted to go over to [boss] Phil Parkinson and stick my finger up. I had a hard time at Bradford," Branston told BBC Radio Bristol.

"He stitched me up last year and made me work really hard for something that was never going to materialise.

"I really just wanted to stick one over him but you can't do that as a player - you have to say the right things at the right time.

"The only way you can show them is by being on the pitch and playing well."

Branston started his career under Rovers boss Mark McGhee during their time at Leicester and has since gone on to play for 18 other different clubs in a career which has spanned 15 years.

He struggled for regular first-team opportunities at both Bradford and Aldershot, and is now ready to prove himself at the Memorial Stadium.

"I bring enthusiasm and passion; I can talk and organise on the pitch and I'm not afraid to tackle," he added.

"I wear my heart on my sleeve and I'm loyal to the club who pays my bills.

"I work hard for every team I've been at. People might see me as a journeyman but I see it as managers want to ring me up and say 'come and work for me'.

"Mark McGhee put me in the reserves at Leicester and he saw my hunger and passion. We've stayed in contact and he's asked me to come here and do a job.

"There's a lot more to come from me as I get fitter and stronger."