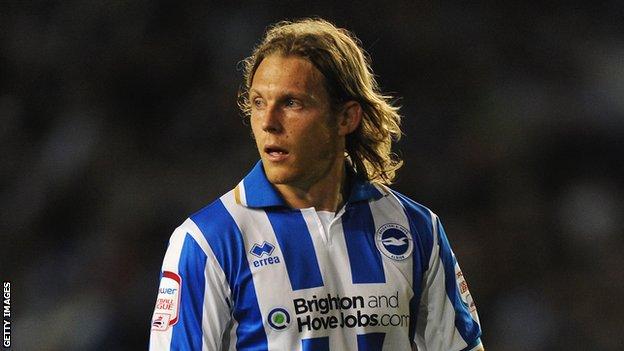 Brighton striker Craig Mackail-Smith says they must be more clinical.

The Seagulls missed a succession of chances in the 1-1 draw against Bolton on Saturday and were denied a win by David Ngog's last-minute equaliser.

Mackail-Smith told BBC Sussex: "We had enough chances in the first half to put the game to bed.

"It shows what happens if you don't take your chances in this division. You can give one chance to a team and they'll score it."

Every chance which came along we wanted to make sure we scored. Maybe that added a little bit of pressure on ourselves

Albion then hit the woodwork three times before the break.

After going ahead in the second half through a volley from right-back Bruno, Andrea Orlandi went close twice for the Seagulls and Will Hoskins forced Bogdan into another save.

However they were forced to settle for a point when Ngog steered in Chris Eagles' pull-back deep into injury time.

"We had handfuls of chances, didn't take them and ended up giving away two points," Mackail-Smith, 28, added.

"We shouldn't be in the position where a late goal matters. We should have been clear by half-time and it would have been comfortable to see out the game.

"We were disappointed in ourselves not taking them.

"Every chance which came along we wanted to make sure we scored. Maybe that added a little bit of pressure on ourselves.

"Bruno stepped up and scored a fantastic goal but it shouldn't be getting to that stage where he is having to score.

"We need to step up to the plate again on Tuesday [against Bristol City] and make sure we put the chances away."