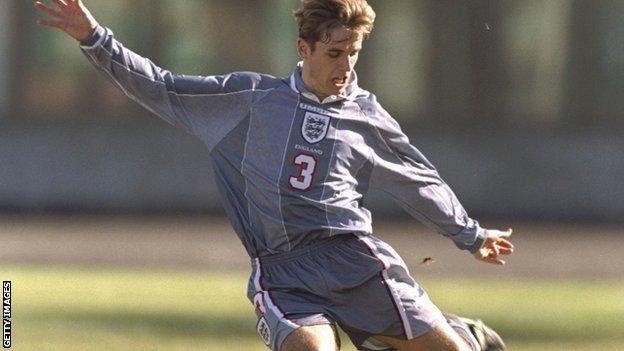 Kenny Swain's England Under-16s team will secure a 12th successive win in the tournament, which also comprises Northern Ireland and Wales, with a point - but this occasion can mean more than simply lifting a trophy.

The games I played for England at youth level were some of the best and most important games of my career.

One of the Premier League's most enduring figures is testimony to how these fiercely-fought youth games can provide a vital stage in a youth player's development and career.

Everton captain Phil Neville, 35, represented England at this level on 10 occasions before going on to win 59 senior caps and recalls his time with the youth team as a crucial element of his long career.

"The games I played for England at youth level were some of the best and most important games of my career," he said.

"When I played at under-16 level we used to play games at Wembley, which was an unbelievable experience. Playing against teams like Italy and Holland, it gets you used to playing international football at the highest level.

"I remember playing against top-class players like Francesco Totti and Boudewijn Zenden in front of huge crowds and it was vital for my development at the time.

"One of my best schoolboy football memories was when we beat Scotland 1-0 at Ibrox and I was fortunate to score the winning goal. The games are so passionate and it was a great victory for us that day. Like any derby they are always competitive and that was the first time I experienced the great rivalry between England and Scotland."

Neville also believes the new National Football Centre at St George's Park in Burton will by a key building block in the growth of England's future stars.

"I've been around St George's Park and seen the magnificent facilities that are on offer to the England teams now and it can only help the progression of players in the future," he added.

"If you are an under-16 player training and staying at St George's Park for the first time, using the facilities that are on offer and seeing the history that goes with the England football team can only benefit you.

"Playing for England is the pinnacle of any player's career and to me St George's Park will be a constant reminder to young footballers of what's needed to become a top player in the game."