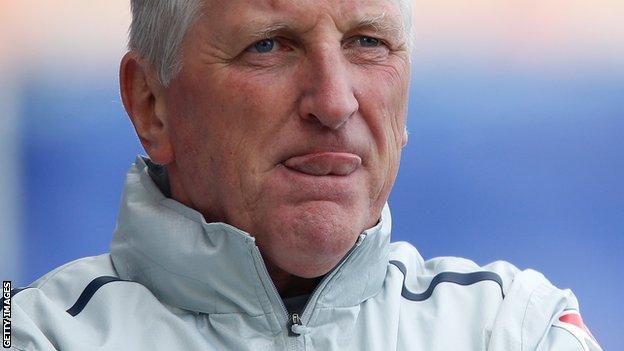 Tranmere manager Ronnie Moore says seeing the League One leaders concede late goals is becoming a worry for him.

Rovers were on Saturday by Greg Tansey's stoppage-time equaliser.

"Brentford scored against us in the 96th minute, MK Dons in the 88th and I'm sure there's another one or two," Moore told BBC Radio Merseyside.

Close, but not close enough...

So far this season, Tranmere have surrendered six points from League One games in which they have been leading with five minutes to go

"In those games, we could have probably done something about it. But fate wasn't kind to us on Saturday."

The Tranmere boss was certain that Tansey's effort was not meant to loop over goalkeeper Owain Fon Williams, adding: "I can't blame anybody.

"He'll never score a goal like that again. I think he was just putting it back into the box. It's flown over Owain's head and into the top corner.

"[Without the late goals] we could have been six or seven points clear."

Despite the setback of dropping two points at the Lamex Stadium and the disappointment of seeing their results elsewhere meant Tranmere extended their lead at the top of League One to three points.