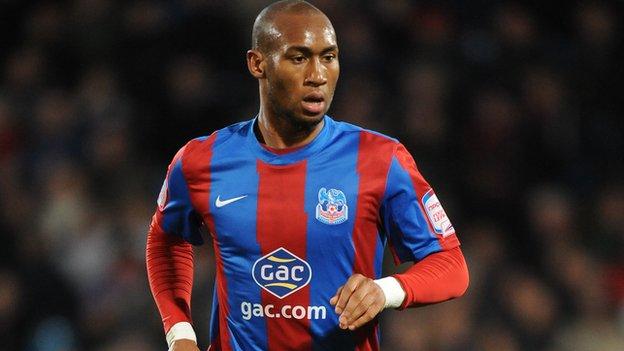 Hughes was set to join the League Two promotion-chasers from Notts County, only for the deal to be shelved when the paperwork was not done in time.

But Andrew, 25, who was a free agent since leaving Palace at the end of last term, has been signed until 26 January.

"Like any Micky Adams player, the fans can expect 100%," said Andrew.

"He believes in me and that's a big thing in football to have a manager with belief," he told BBC Radio Stoke.

Vale boss Adams first signed Andrew when he was in charge at Brighton four seasons ago - when he hit three goals in nine games on loan.

But he is more renowned as a target man rather than a poacher, having hit 15 goals in 180 appearances, more than half of which came via the bench, in an eight-year professional career which started at Luton and has also taken in loan spells at Grimsby Town, Bristol City, Millwall, Swindon Town and Leyton Orient.

"Micky spoke to my agent a week ago and said he was keen to do something if I kept fit," added Andrew.

"I feel pretty fit. It's been pretty tedious. I've been training on my own for about three months, doing a bit of boxing, hill runs and bike rides to keep myself in shape.

"I know all about being through administration, having been through it a couple of times.

"But you'd never have thought that Vale have been in administration. That's testament to the people around the place."

Meanwhile, Vale have recreated the role of chief scout following their emergence from administration, having appointed George Foster, who previously worked in the same role for Adams at Coventry City.

"It is good to have any sort of scout on board after a while without anybody at all," said Adams. "The coaching staff have been out at matches and I am out most nights watching games, so it will take a little bit of pressure off me."

The former Wolves chief scout, 56, who also managed Mansfield Town and Telford United, started his playing career with home-town club Plymouth Argyle, before a season at Derby County, followed by 373 games for Mansfield.