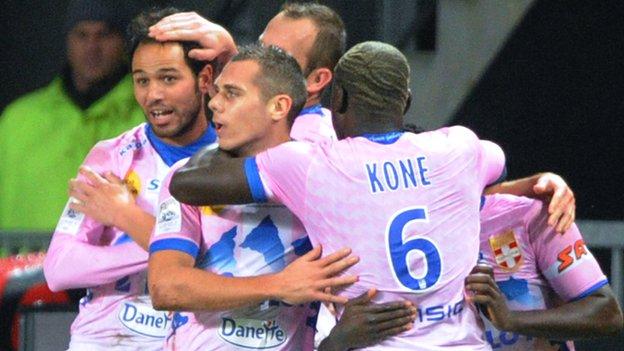 Ivory Coast defender Lamine Kone scored his second Ligue 1 goal this season for Lorient who were playing away at Bastia. Kone struck an equaliser for his side in the 31st minute, but Lorient went on to lose the game 2-1.

Tunisia midfielder Zouhaier Dhaouadi scored the only goal of the game four minutes after coming on as a substitute for Evian who edged out Rennes.

Jordan Ayew also accounted for the only goal of the game to give his side Olympique Marseille all three points in their triumph over Lille. The Ghana striker has taken his tally to four goals since scoring earlier in November.

Mali striker Mamadou Samassa was sent off 25 minutes after coming on as a substitute as his side Chievo were held 0-0 by Siena. He is yet to score a goal in five Serie A games.

But it was a better weekend for Morocco striker Mounir El-Hamdaoui, who equalised for Fiorentina in the 84th minute - two minutes after coming on as a substitute - to earn his side a point in a 2-2 draw with Torino.

Real Valladolid won their first game in three matches thanks to Angola striker Manucho Goncalves, who scored the only goal of the encounter against Granada in the 63rd minute. Manucho has taken his tally to four goals in La Liga this season.

Imoh Ezekiel scored twice for Standard Liege who beat Lierse 3-0. The Nigeria striker has found the back of the net seven times in the Pro League this season.

Anderlecht pressed on with their lead after overcoming Beerschot 4-1 with the Congo Democratic Republic striker Dieudonne Mbokani scoring one of the goals for the league leaders.

Lokeren won their fifth straight game thanks to a last-minute winner by Senegal defender Ibrahima Gueye as his side beat Mons 2-1.

The Gambia's Ebrahima Sawaneh rescued Leuven with a last-gasp penalty in the added time to earn his side a 1-1 draw at Genk. Sawaneh is joint top scorer with 13 goals.

Ivory Coast striker Wilfried Bony cemented his position as top scorer after hitting his 15th of the season which proved to be a 74th-minute winner for Vitesse Arnhem to help them beat league leaders PSV Eindhoven 2-1. Vitesse are in third position and trail PSV by two points.

Nigeria's Kalu Uche gave Kasimpasa the lead in the 40th minute in their 1-1 draw with Orduspor. It was Kalu's seventh goal in the Super Lig.

However, fellow Nigerian Michael Eneramo has scored one goal more than his compatriot. Eneramo was on target with his fifth goal after scoring Sivasspor's fourth goal in the 40th minute as they defeated Kayserispor 4-2.

Morocco midfielder Ismail Aissati equalised in the 60th minute for Antalyaspor who drew 1-1 away at Bursaspor.

Moussa Sow equalised for Fenerbahce one minute before half-time as they came from behind to beat Genclerbirligi 4-1. It was the seventh goal for the Senegal striker in 12 games.

Albert Meyong Ze scored a hat-trick in the eight-goal thriller between his side Vitoria Setubal and Rio Ave. The Cameroon striker completed his hat-trick in the 86th minute from the penalty spot, but despite his effort Setubal lost 5-3 at home.

Angola striker Mateus da Costa scored the only goal of the game in the 57th minute as his side Nacional beat Estoril.

After three consecutive defeats Veria salvaged some pride by drawing 1-1 with Kerkyra. Nigerian striker Michael Olaitan fired home for Veria with only two minutes remaining to earn his side a point as he entered the score sheet for the first time this season.

The weekend's big game ended in a 1-1 draw between PAOK Salonika and league leaders Olympiacos who took the lead through Algeria striker Rafik Djebbour in the 27th minute. Djebbour is the top scorer with nine goals as Olympiakos maintain their eight-point lead ahead of Paok.

Ideye Brown was the star of the Kyiv derby as he scored twice for Dynamo who trounced Arsenal 4-0. The Nigeria striker scored a minute before half-time and completed his double in the first minute of added time. Six Africans tasted action in the derby with three lining up for Dynamo Kyiv.

Senegal striker Dame Ndoye scored twice in the first 20 minutes for Lokomotiv Moscow who beat Krasnodar 3-2. But it was the Nigeria striker Victor Obinna scored the winner in the 51st minute to secure all three points.

There has not been an African goal scorer in the Bundesliga for the third consecutive week since Nando Rafael and Mame Diouf found the back of the net earlier this month.

In the top-of-the-table clash between Schalke 04 and Eintracht Franckfurt, Karim Matmour was sent off with three minutes left as his side Eintracht Frankfurt, who are in fourth position drew 1-1 away from home. The Algeria midfielder had earlier been booked in the 55th minute before receiving his first red card of the league.