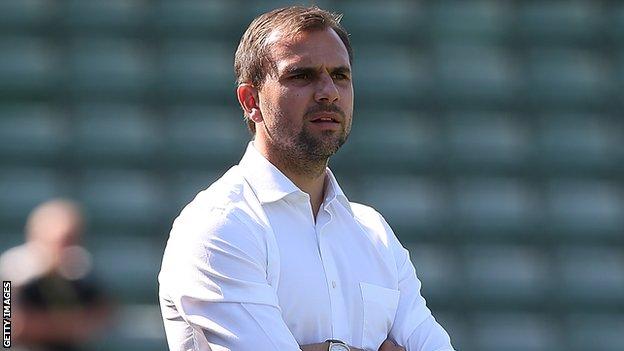 Plymouth Argyle are to advertise for a director of football to support under-pressure manager Carl Fletcher.

The 32-year-old, who captained Wales and Argyle as a player, has seen his side go on a run of eight games without a win.

New will head the search.

"Colin was brought to the club for his extensive knowledge of the game," said Argyle owner James Brent.

"He has met with Carl Fletcher and, like the rest of the board, is very impressed with Carl's talent and enthusiasm.

"He has also identified - as we already knew - a lack of relative football experience across all areas of the club.

"It is a reason why we were so eager to bring Colin to the board.

"We are not talking about pure knowledge; we are talking about the type of football experience that can only be achieved by many years service in the game."

Sexstone, who is a former chairman of Bristol City, feels a director of football will help turn the club's fortunes around.

"Since my appointment, I have had the chance to get to know the club, including talking with Carl Fletcher, whose passion and commitment for his task are quite striking.

"The club appears to be in pretty good shape after its problems of last year.

"However, as the Board has acknowledged, it does not possess the sort of in-depth football experience which I think can greatly benefit Argyle.

"I believe this can be addressed by appointing a Director of Football, initially until the end of the current season," he told the club website.