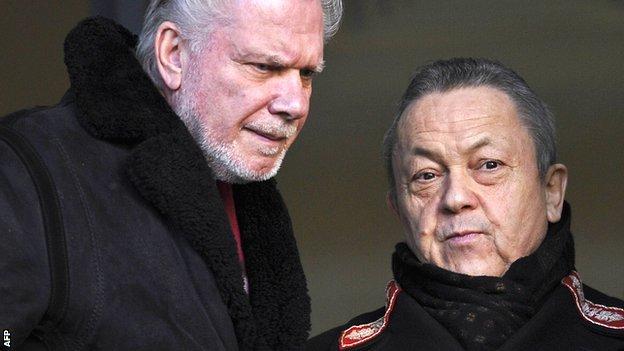 West Ham's Jewish co-chairman David Gold says the club will have a "zero tolerance" approach to any supporters found to have made anti-Semitic taunts.

Two Hammers fans have accepted a police caution, and one of them has been given a lifetime ban from matches for gestures made at Tottenham on Sunday.

Gold said: "We have a clear stance towards any kind of discriminatory behaviour - it will not be tolerated."

We are a club that promotes tolerance and inclusion of people from all backgrounds, race and religion

West Ham's Israeli midfielder Yossi Benayoun said he was "embarrassed" by some of the chanting at the game.

The Football Association has said it will hold an investigation after reports of anti-Semitic taunts during the 3-1 Premier League win for Tottenham, who have strong links with the Jewish community.

Police said the two fans were arrested inside White Hart Lane for racially aggravated public order offences. It is understood they made Nazi-style salutes.

A complaint about abusive chanting has been made to police, who will meet with the complainant before deciding whether to open a formal criminal investigation.

Gold, who took over the east London club with David Sullivan nearly three years ago, said: "David and I are leading an investigation from the top of the club to establish exactly what happened at White Hart Lane on Sunday.

"If we can identify any individuals that have acted inappropriately they will be sought out and banned by the club as part of our zero tolerance policy.

"At the same time we must remember that West Ham United has some of the best fans in the land and we must not let the tens of thousands of supporters that follow our club over land and sea in exactly the right way be overlooked."

It has been reported that a section of the away support sang songs which referenced Adolf Hitler, the German Nazi leader who ordered the mass murder of six million Jews during the Holocaust of the 1930s and 1940s.

Some West Ham fans are also alleged to have taunted the home crowd about the stabbing of Spurs fans in Rome last week.

Gold said: "Like many of the people around me in the directors' box at White Hart Lane I didn't hear or see any of the reported inappropriate behaviour during Sunday's game with Tottenham. If I had, then I'm sure I would have been mortified.

"As a board we genuinely believe we have some of the best supporters in the country and we will not let a minority of fans, no matter how small, affect the reputation of our great club.

"We are a club that promotes tolerance and inclusion of people from all backgrounds, race and religion. Just a quick look around our boardroom table would tell you that."

The 76-year-old's great grandfather was found hanged around the turn of the 20th Century after surviving persecution in Poland but being "driven to despair" by anti-Semitism in England.

"I am very proud of my Jewish heritage and have always been made to feel welcome at West Ham since I started watching them as a young boy back in the 1950s," said Gold.

"That wasn't always the case growing up in the East End and I know first-hand how difficult dealing with prejudice can be, which is why I feel so passionately about promoting inclusion in society today."

Benayoun, 32, who is on loan from Chelsea, said a minority of fans were to blame at Tottenham and that the FA and West Ham would "do everything to find and punish them".

He added on his Twitter page: "I have a great relationship with the West Ham United supporters, from my first spell at the club and again now I am back on loan here.

"This is why I was very disappointed to hear some of the songs and it was embarrassing."

West Ham boss Sam Allardyce believes supporters involved should be banned for life. "It's a small minority but at the end of the day a small minority can make themselves heard at football matches if they really want to and we must deal with it," he said.

"The good thing is with security cameras and CCTV cameras, it's difficult for them to get away with it. Hopefully we can pick out those people and punish them in the right way."