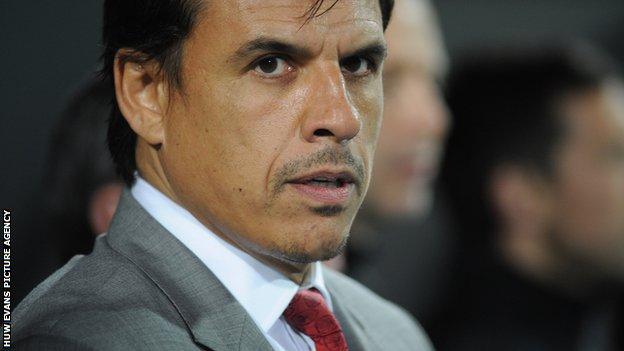 Chris Coleman has admitted he had to think hard before accepting the offer to manage Wales following the death of Gary Speed.

Speed was found hanged at his home in November 2011 and former international team-mate Coleman was appointed manager two months later.

"I always wanted to do the job but not under these circumstances," he said.

I'll never forget that horrible feeling that I had when I got the bad news.

"I was a little bit sceptical when it came my way. I knew it would be tough because of the emotion attached to it."

He added: "I still wanted to do it. I wanted to manage my country at the end of the day. I'm glad I'm doing it but it has been tough."

Coleman was in charge of Greek side Larissa and preparing for a game when he heard the news of Speed's death in November 2011.

"An hour before the game I got some text messages from Lee Clark, the Birmingham City manager, who is a big pal of mine," Coleman added.

"I'll never ever forget the disbelief, the feeling of not understanding what had gone on. I don't remember the game. I think we drew. I sat in the dugout in shock.

"I'll never forget that horrible feeling that I had when I got the bad news. I don't think you ever get over something like that.

"You learn to live with it but never forget it."

Since then Wales have lost five out of six games under Coleman, including a heavy 6-1 defeat by Serbia in a World Cup qualifier.

The former Fulham and Coventry manager admits to a tough year at the helm but says he does not doubt his own ability.

"I never questioned myself," Coleman added.

"When you're a manager you've got to have thick skin. I certainly have.

"You've got to have your own mind and be strong enough to take the criticism and it comes everybody's way.

"You've got to get through that, keep believing in yourself and just get on with the job, which I've always done."