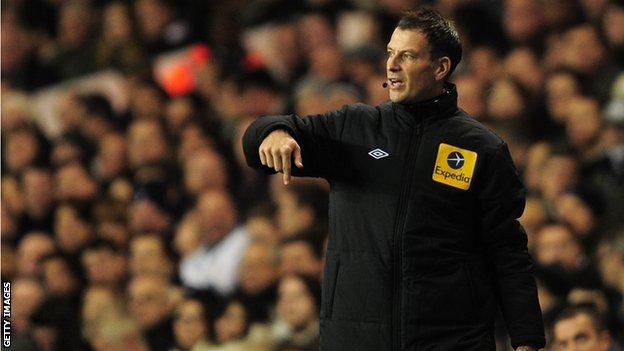 "Critics will no doubt round on Chelsea for failing to say sorry to Mark Clattenburg for accusing him of being a racist.

"While they express regret for creating the storm which confronted the referee, the club stop short of apologising.

"Many will argue this is unacceptable from a club which has lost its way.

"But, to be fair, Chelsea were in a difficult position. As the FA pointed out in its statement on the issue last week, the complaint was brought in good faith and Ramires, the player who thought he heard the comments, did nothing wrong.

"What could the club do? To dismiss it would have left them open to accusations of a cover up. Having backed their captain John Terry throughout the Anton Ferdinand race row, that could have potentially been even more damaging."

The Blues also regretted the subsequent "intense media scrutiny" faced by Clattenburg and his family.

The allegations were dismissed by the Football Association and the police dropped their own inquiry.

The club also indicated they would be happy for Clattenburg to referee at Stamford Bridge in future.

Clattenburg's boss, the Professional Game Match Officials Limited (PGMOL), also said it would have "no issue" in appointing him to Chelsea fixtures.

A joint statement by the Premier League, PGMOL and Chelsea said: "It is time to draw a line under this incident."

Clattenburg missed four weekends of Premier League matches while the FA investigated Chelsea's complaint, but will return to referee Norwich's match at Southampton on Wednesday.

In Tuesday'sjoint statement, Chelsea insisted they had been duty bound to report the allegation to the FA.

"The referees accept that, given Chelsea FC had received a good faith claim from one of their employees, the club had an obligation under FA rules to report the allegation," the statement read.

However, Chelsea acknowledged that making the allegations public immediately after the game led to unwelcome press attention towards Clattenburg and his family.

The Norwegian, who turned down four Chelsea penalty appeals in the game at Stamford Bridge, admitted earlier this year that he still occasionally received death threats related to the game.

"If you do something to hurt someone and make a mistake like that then I think it's ok - if you are a referee, a player, a team official - to say sorry.

"It would be good for football [for more conciliation]. It's a lot of pressure, a lot of prestige and a lot of money but, still, it's a game.

"Referees at the top level are very strong. They are mentally and physically fit so they will cope with situations like this.

"So it's more a problem for the new referees, the young and promising referees. And then it will be a problem in the long-term because you don't get the best referees because they don't like to be... put under this kind of pressure.

"The club regrets not having given more consideration before issuing a statement on the evening of Sunday, 28 October," the statement continued. T"he club also regrets the subsequent impact the intense media scrutiny had on Mark Clattenburg and his family."

Referees' union Prospect welcomed the joint statement and said the use of the word "regrets" was "tantamount to, and accepted by Mark and the Select Group [of referees], as an apology".

"This was an important move forward in confirming Chelsea's recognition of Mark's integrity and impartiality."

The 37-year-old always denied the charges and the Metropolitan Police dropped its own inquiry earlier this month.

Clattenburg admitted that he feared that the allegations could have brought an end to his career as a referee.

"To know you were innocent of something but that there was the opportunity for it to wreck your career was truly frightening," he said in a statement after being cleared by the FA.

Upon clearing Clattenburg, the FA charged Mikel with misconduct following his involvement in the incident.

Chelsea have indicated he will not deny the charge but will request a hearing to "explain the mitigating circumstances".