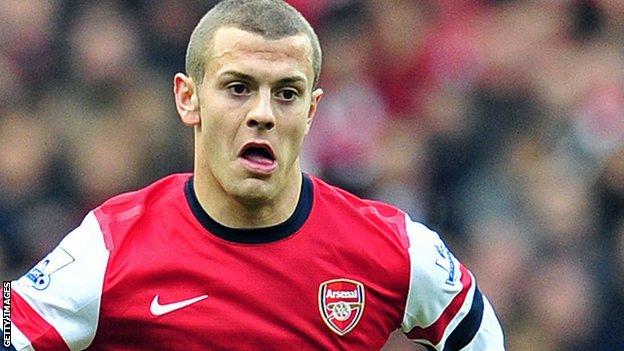 Arsenal manager Arsene Wenger wants Jack Wilshere to show his commitment to the club by signing a new contract.

The 20-year-old midfielder, who has recently returned to action after a 15-month injury lay-off, has two-and-half-years left on his current deal.

"He [Wilshere] has always been very committed to this club and I hope he will show that," Wenger said.

"There is only one way to show that and it is to commit your long-term future to the club."

Wilshere has come through the ranks at Arsenal and has already broken through into the senior England side.

He was an unused substitute in Arsenal's draw with Aston Villa on Saturday, with Wenger resting Wilshere after two games in quick succession, but he is expected to figure against Everton on Wednesday.

Wenger added: "We have quite a lot of British players. Like [Kieran] Gibbs, [Alex] Oxlade-Chamberlain, Wilshere, Aaron Ramsey and, of course, we still have the case of [Theo] Walcott.

"You want them all on long-term contracts."

Walcott, who is out of contract in summer 2013, has yet to agree a new deal and Wenger said there was "no news" on that front.