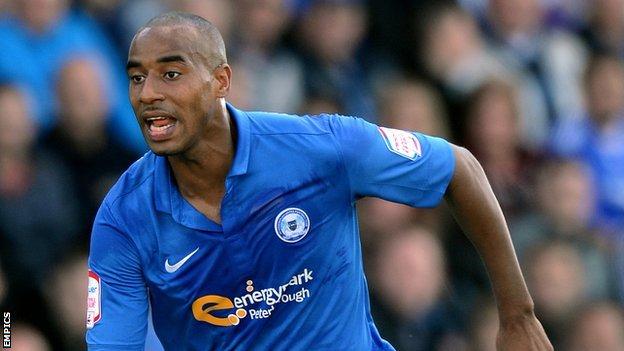 Ipswich Town striker Tyrone Barnett has said he would be "delighted" if he never returned to Peterborough United.

following a breach of club discipline at Posh.

Peterborough boss Darren Ferguson has said he does not see a future for the forward at London Road.

"Obviously I'm contracted there so that is my parent club," Barnett told BBC Radio Suffolk. "But if I could get away I would be delighted."

Barnett's Posh exit came after he and winger Nathaniel Mendez-Laing, now on loan at Portsmouth, were

"There's always regrets because I didn't want to leave the club in the way that I did," he said.

"I'd rather it be on good terms. But that's life. You take it, get on with it and hopefully I can move on."

Barnett has said supporters at his new club should not base their perception of his character on the manner of his Peterborough exit.

"I'd say take it with a pinch of salt. The lads and people who know me know I'm not a troublemaker or whatever people want to come up with," he said.

"When you get to know me I'm an all right guy."

The former Macclesfield frontman switched to Peterborough from Crawley in a club-record £1m move in February and went on to score four goals in 13 games.

But, after netting just once in 10 this term, he hopes to contribute the goals Town need to haul themselves out of the Championship relegation zone.

"I want to play as many games as I can and hopefully prove myself at this level," he said.

"I'm fairly confident I can get goals. I just need to get a few more games under my belt, get to know the lads a bit better and I'm confident in my ability. It's got me this far."