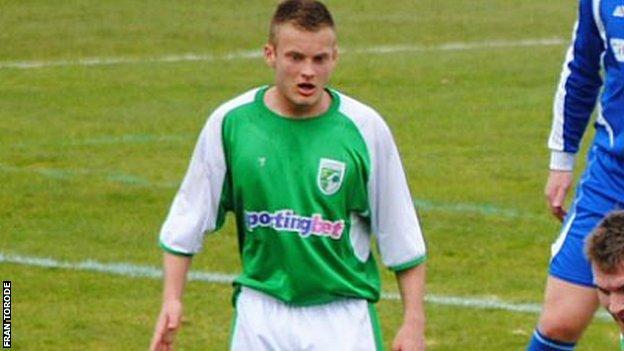 Bristol City have signed Guernsey FC midfielder Rhys Jordan on a professional contract until the end of the season after a successful trial.

The 18-year-old has been playing for the Combined Counties League side since returning to his native Guernsey in 2011 from New Zealand.

He is a former New Zealand Under-17 international and played at the 2011 Under-17 World Cup in Mexico.

It was remarkable for a 17-year-old to have the confidence and ability to dominate games and demand the ball.

"I've worked really hard to get my chance and I'm delighted to have been given this opportunity to play football at such a high level.

"I want to do all I can to grow as a player and hopefully I'll be pushing to be involved with the first team in the future.

"I would like to thank Guernsey FC for allowing me the chance to play competitive football in the UK and without the club, this chance wouldn't have come my way."

His manager at Guernsey, Tony Vance, feels he has what it takes to be a success in the Football League.

"It was clear when he first got involved with the club last season that he had the potential to go into the professional game," he said.

"It was remarkable for a 17-year-old to have the confidence and ability to dominate games and demand the ball.

"By having the platform that Guernsey FC provided him, it was only a matter of time before a professional club would declare an interest in Rhys."