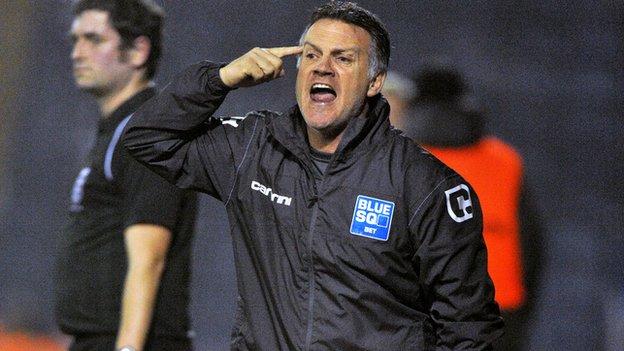 After dropping three of his players, Telford responded with Saturday's 1-0 FA Trophy first round win at home to non-league rivals Nuneaton Town.

"If I've got to leave people out, upset one or two, I'll do it," he told BBC Radio Shropshire.

"I keep saying it's players who pick teams."

Sinton added: "I want competition. I pick sides on what I see. And, based on the way we played against Kidderminster the week before, nobody could complain about being left out.

"Until we get the right right formula, I've got licence to juggle it around. And I went back to type, to the way we played in our first six or seven matches."

Admittedly, Telford reached the second round (and a trip to Evo-Stik Division One South side King's Lynn on 15 December) thanks only to Steve Leslie's somewhat fortuitous first-half winner, a 30-yard free-kick that slipped through Boro keeper Adam Smith's fingers.

But, after seeing his side slip from eighth to 12th in the Blue Square Bet Premier table, Sinton is hoping that the confidence gained by Saturday's revenge over their FA Cup conquerors can now help end the Bucks' run of six league games without a win.

Their next two games - at home to Barrow next Tuesday night before the following Saturday's visit to Hyde, are both against struggling sides, prior to their Trophy date in Cambridgeshire.

Then come a tough pair of Christmas fixtures - at home to pre-season title favourites Luton Town, before the Boxing Day trip to promotion-chasing Wrexham.

"We needed that win," added Sinton. "And I just hope it will kick-start us going onto the busy Christmas period."