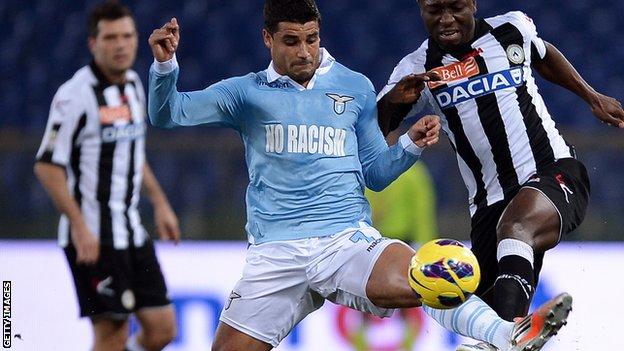 Lazio wore anti-racism shirts during Tuesday's game against Udinese, after a Tottenham fan was stabbed on the eve of last week's Europa League match.

Spurs fan Ashley Mills was taken to hospital in Rome after an attack reportedly involving over 40 people.

Alleged anti-Semitic chants were also said to have been heard at the match.

Lazio insist their fans were not behind the attack and distanced themselves further on Tuesday by wearing shirts with "NO RACISM" across the front.

There has been speculation last week's attack was carried out by a far right group with anti-Semitic leanings; Tottenham traditionally draw support from north London's Jewish community.

Several other Spurs fans were also injured in the attack, which was initially blamed on Lazio supporters - something Lotito denies.

"Lazio fans are not racist and this incident had nothing to do with football or sport," he said.

Lazio president Claudio Lotito has visited Mills in hospital and presented him with a Lazio shirt bearing his name.

"These people are not fans," he said.