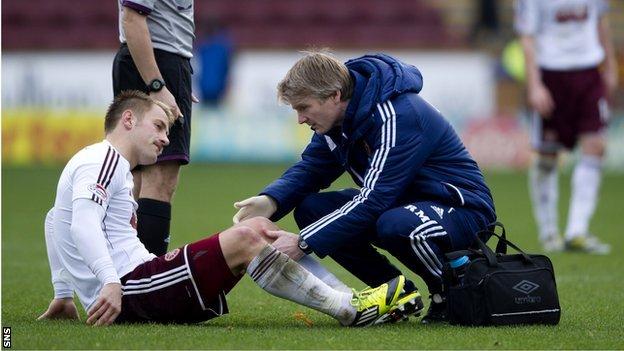 Hearts defender Danny Grainger requires surgery on the anterior cruciate ligament in his left knee and faces a nine-month absence from the first team.

Grainger landed awkwardly during Hearts' draw against Motherwell at Fir Park on Saturday and a specialist in Bradford has confirmed the ACL damage.

The 26-year-old left back said: "To say I'm gutted is an understatement. I'm going to miss the rest of the season.

"I need an operation which means I'll be out for six to nine months."

Grainger will have the procedure in two weeks' time.

He added: "I have had lots of kind messages from footballers and fans, which has been overwhelming."

His manager at Tynecastle, John McGlynn, said he was "gutted for the lad".

He told the club's website: "He had been doing great but this is a difficult time for him.

"He is a professional footballer who now can't play for a long time.

"We wish him every luck with his recovery and the club will do all it can to help him through this."

McGlynn has Kevin McHattie and Ryan McGowan as options for cover for Grainger.