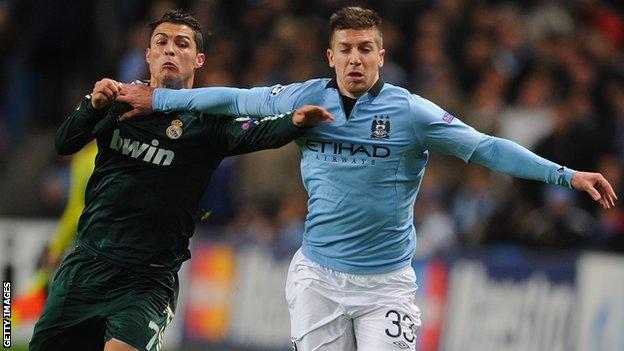 Manchester City coach David Platt says the form of Serbian teenager Matija Nastasic is the reason Joleon Lescott has been out of the side recently.

Lescott, 30, has not started a game for City since their 3-1 defeat away by Ajax in October, with a back problem initially keeping him out.

The England international was available for the last three games but Nastasic, 19, has now made seven straight starts.

"That is testament to [Nastasic]. He has stepped in," said Platt.

Lescott even failed to make the bench for City's 0-0 draw with Chelsea on Sunday at Stamford Bridge with Kolo Toure preferred as defensive back-up, but Platt insisted the England international was available and will be for Wednesday's visit to Wigan.

The City first-team coach has praised Nastasic - who joined from Fiorentina for £13m plus Stefan Savic - for adapting to English football quickly since his summer move from Serie A side Fiorentina.

Platt picked out the 19-year-old's performance in a goalless draw with West Ham on 3 November as the highlight so far.

"The first couple of games he has had to get used to English football but he has done that very quickly," said Platt.