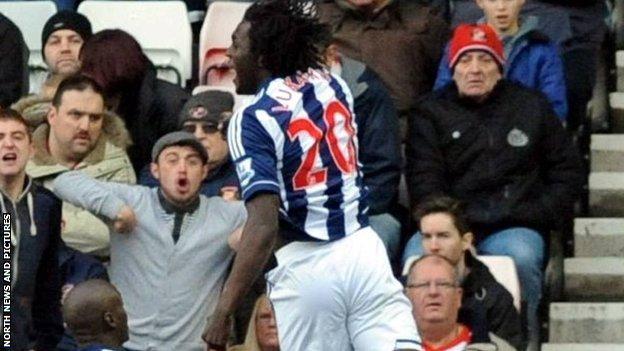 Police have arrested a 21-year-old man over an alleged racist gesture towards West Brom striker Romelu Lukaku in their 4-2 victory at Sunderland.

He has been arrested on suspicion of racially or religiously aggravated intentional harassment.

An investigation began after a man was pictured making an apparent "monkey" gesture during the Premier League match on Saturday.

The incident occurred after a goal from Lukaku put the away side 3-1 ahead.

A Sunderland spokesman said: "SAFC operates a policy of zero tolerance towards racism and anti-social behaviour of any kind.

"Naturally we will co-operate with the police in fully investigating any such incidents."