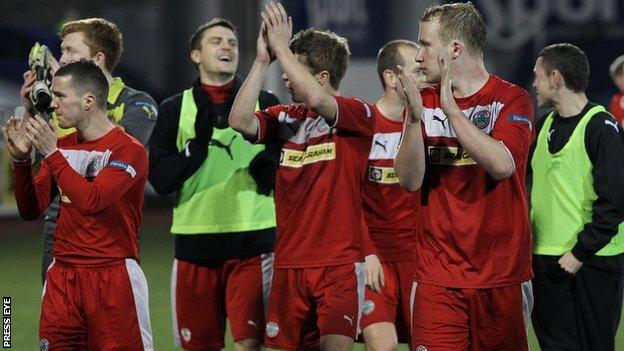 There is little doubt that the big derby game in Belfast this Christmas will be the showdown between Cliftonville and Crusaders at Solitude.

It is a sign of the changing times in local football as champions Linfield grapple with the less familiar scenario of playing catch up in the battle to return to the summit of the local game, and rivals Glentoran continue to evolve under new boss Eddie Patterson.

Crusaders are now beginning to flex themselves and striker Timmy Adamson underlined his undoubted goalscoring pedigree with a hat-trick against Donegal Celtic last weekend, not the first time he has walked away with the match ball.

The former Dungannon Swifts striker delivered four goals in a League Cup quarter-final against Carrick Rangers last year on his way to an 11-goal total in his first season at Seaview.

There was also a hat-trick for the Swifts in a home league win against Coleraine the previous year.

Adamson is just one reason why Crusaders are beginning to emerge as a genuine threat to Cliftonville's hopes of winning the coveted Gibson Cup.

In a team that possesses players of the calibre of speedy Paul Heatley, commanding Jordan Owens and the timeless Gary McCutcheon, the Crues, like their north Belfast rivals, have the ability to deliver an abundance of goals from more than a single source.

Crusaders have been picking up points with precision over the past six weeks. One defeat in eight league games has seen them collect 19 points out of a possible 24.

They outclassed the Reds 3-1 at Seaview in October so the traditional Boxing Day bash could again be eventful!

The challenge for early season pacesetters Ballinamallard United is staying power. So far so good but can they live with the top teams?

The answer may well lie in the fact that they emulate Clftonville and Crusaders in that they can produce goals from several sources, four to be precise - Ryan Campbell, Jason McCartney, Chris Curran and Andy Crawford are all contributing. Whether they produce enough by the end of the season will tell a tale.

Coleraine are also flirting with the top three but they depend heavily on former Linfield and Lisburn Distillery striker Curtis Allen who has, worryingly for manager Oran Kearney, recently revealed his desire to try making it in cross-channel football again when his Showgrounds contract expires next summer.

Allen, scorer of 25 goals last season and nine already this campaign, was a trainee at Bournemouth for three years before returning to play under Paul Kirk at New Grosvenor.

At the Oval, Andrew Waterworth has already more than doubled his total goal haul for last year and will continue to be Glentoran's major threat.

Linfield, who host the Glens on Boxing Day, have not reached maximum capacity. They are conceding a goal a game on average and their fans are anxious to witness the Blues set off on a run of victories and silence their detractors.

The champions may have lost only once in five league games since going down 3-2 at Coleraine in October but manager David Jeffrey knows, in addition to the unhappy look of their goals against tally, his side needs to up the ante at the other end.

Two wins in the opening seven Premiership games left the Blues with a lot of hard graft to redeem themselves.

So, like DJ, we await the response from Messrs Thompson, McCaul, Carvill and McAllister. If they can find their form in front of goal they can send Linfield soaring and end the potential for a long, hard winter of discontent.