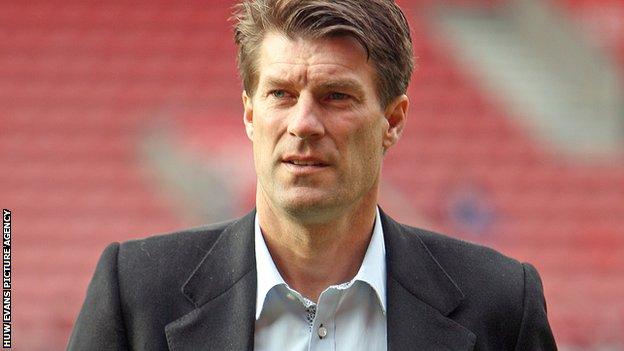 Swansea City will reach a significant marker in their bid for Premier League survival if they beat West Brom on Wednesday, says boss Michael Laudrup.

Victory over the third-placed Baggies would take the Swans to 20 points - halfway to the 40-point target that typically ensures survival.

Since the Premier League was reduced to 20 teams in 1994, only three teams with 40 points or more have been relegated.

"If we could reach halfway after 14 games I'd be very happy," said Laudrup.

"Every time you get three points you tot them up and it would be so important to reach 20 points as it is halfway to the magic number of 40, and then you can look how many games are left."

The Swans have only lost once in their last seven games - a defeat at champions Manchester City - and Laudrup says his side will go into Wednesday's game full of confidence.

"We've only lost one game at home, against Everton, and we don't want [to lose] any more," added Laudrup.

"We know we have to be strong at home and get most of our points here.

"In the last two home games we have played two big sides in Liverpool and Chelsea and now we play West Brom, the surprise of the season.

"We want the three points to extend this good moment in terms of points and performances and to get on."

Albion have exceeded expectations so far under manager Steve Clarke, who succeeded Roy Hodgson in the summer.

They moved up to third in the Premier League with a 4-2 win at Sunderland on Saturday after winning four successive top-flight games for the first time in 32 years.

For the Swans, striker Danny Graham will miss the game as he continues to battle the illness that has kept him out of training for over a week.

And the former Denmark striker refused to be drawn on possible transfer targets in the January transfer window.

"There are always rumours in football; you cannot avoid them and when we are just a month away from the transfer window there will be a lot of rumours," Laudrup said.

"We have to accept that, but you won't get the names from me."