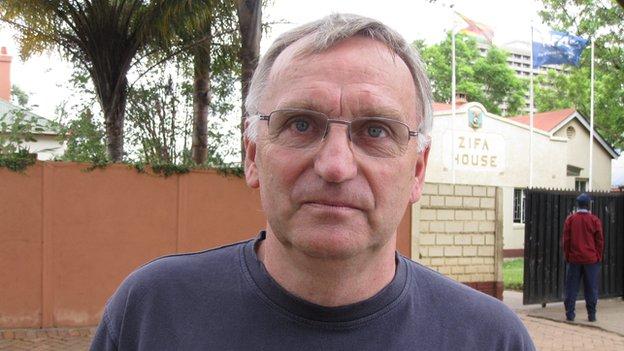 The move is part of Zifa's rebuilding process begins after the Warriors' failure to qualify for the 2013 Africa Cup of Nations finals.

Pagels has been Zifa's national technical adviser since 2010 on a government-to-government agreement.

His main task is to find a Zimbabwean assistant coach, who he can groom to take over permanently next year.

Zifa disbanded the Warriors squad after losing on away goals to Angola in a Nations Cup final-round qualifier in October, and coach Rahman Gumbo resigned last week.

Pagels, who has coached in the German third division, says that he will look at building a team with young talent, and that he will have a bias towards those playing in the domestic league.

"I've seen so many talented young players here and I will want to bring in more players from the domestic league into the national team in a short time," Pagels told BBC Sport.

"The reason that I said I can take the job is because I'm not afraid of anything, and from my experience I've seen so many things in football, good things and bad things, and it's not a problem for me to handle it."

Pagels is the third German to take charge of the Zimbabwe national team, after Rudi Gutendorf and the late Reinhard Fabisch, who was one of the most popular Warriors coaches, having taken the team to within one game of qualifying for the for 1994 World Cup finals.

Zimbabwe's next competitive matches will be two 2014 World Cup qualifiers against Egypt next year, with the Warriors already struggling with one point from two games.