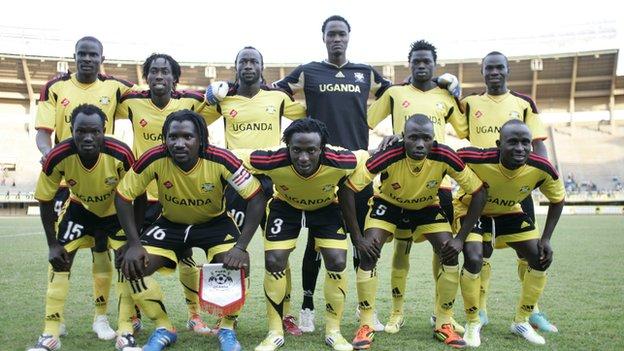 Uganda Cranes became the first nation to qualify for the 2012 Cecafa Senior Challenge Cup after a 1-0 triumph over Ethiopia.

The defending champions and hosts of the tournament scored early through Brian Umony in the ninth minute.

A heavy afternoon downpour made for a wet surface and difficult conditions but Uganda played with a lot of purpose to pin the Ethiopians back for long spells of the match.

Fikru Teferra Lemessa, the only player who featured prominently for the senior team that qualified for the 2012 Africa Cup of Nations, gave a captain's performance for Ethiopia but was kept in check well by the Cranes.

"We are happy to make it to the quarters, but we need to win the last group game against South Sudan first," said team skipper Hassan Wasswa.

In an earlier match, Kenya's Harambee Stars redeemed their hopes of making it to the last eight with a 2-0 win over South Sudan, who became the first side to bow out of the tournament - they lost their first game 1-0 to Ethiopia.

David Ochieng and Clifton Miheso netted in each half for Kenya, who will need a draw against Ethiopia to qualify for the knock-out stage.

'I am very happy with the attitude and we need to keep pushing hard," said Kenya coach James Nandwa.

South Sudan coach Zoaran Djordjevic said that despite the loss, his boys had improved from the first match and he added that they are getting much-needed exposure.

The winner of Wednesday's match between Tanzania and Burundi will automatically qualify for the knock-out stage.

Somalia take on Sudan in Wednesday's other game.