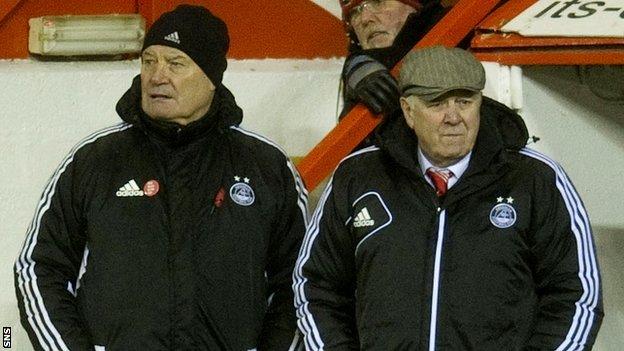 Aberdeen manager Craig Brown criticised his defence after a defeat he called "unacceptable".

And veteran manager Brown was in no doubt where the blame for the defeat lay.

"To lose three goals at home, when we've got the second-best defensive record in the league is unacceptable," he told BBC Scotland.

"I think, when you're a goal down and get back to 2-1 up at home, you shouldn't lose the game - and we contrived to lose it."

Brown maintained what had annoyed him was the manner in which the goals were lost.

"The first one, there were circumstances there that we don't agree with," he said. "I thought it was a free-kick, it wasn't given and we lost a goal.

"For the second one, we softly conceded a corner unnecessarily and from that they headed the goal. And the marking at the corner was, again, poor.

"The third one we were defensively all at sea."

And the former Scotland boss was frustrated that his players had missed a golden opportunity to top the table.

"If we'd had our full side, with all our experienced players, I'm sure they would have coped better," he said.

"We had an expectation that we didn't fulfill and that's what annoys me.

"We ended this game, with Chris Clark's injury, with no midfielders with first-team experience."

Brown also admitted to frustration at his side's superior away form compared to displays at Pittodrie.

And he urged his side to deliver in the Scottish Cup to make amends for their League Cup exit and poor home form.

"If we're not going to succeed at the top of the league - which I hope we will - a cup run would compensate for the disappointment of the other cup and for two defeats at home in the league," added Brown.

"We've gone away to St Mirren and away to Hibs and won games, and we lost to Celtic and we lose to Inverness at home.

"For the home fans it would be better the other way round.

"We have to make up for it by beating Motherwell in the cup."