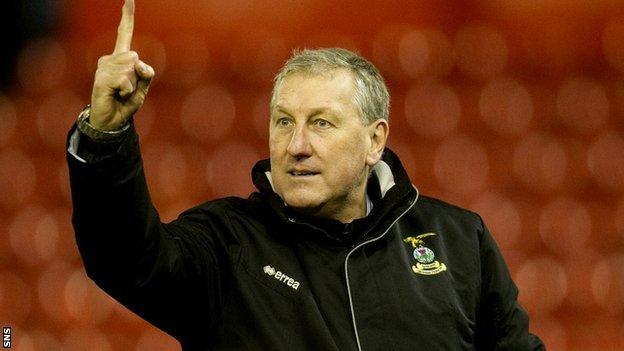 Inverness Caledonian Thistle manager Terry Butcher was pleased to have ground out victory in a game he described as "horrible".

The Highlanders came from behind in the second half to beat Aberdeen 3-2 at Pittodrie.

And Butcher expressed joy that his side are now second to Celtic only on goal difference in the Scottish Premier League - their highest-ever placing.

"It was a great game to win," he told BBC Radio Scotland.

"We could have lost it and had a number of chances to bury it in the second half.

"Are we joint-top now? That sounds quite nice. This is our highest-ever league position, so we're creating history.

"It was one of those horrible games where there was no quality football really."

The former England captain highlighted how the match changed in the second half, with Aberdeen going 2-1 in front before the Inverness comeback.

"The game just opened up," he added. "It was more like a basketball game. I'm just delighted we scored more than the opposition.

"This set of boys are unbelievable, we were nowhere near our best but we still won the match.