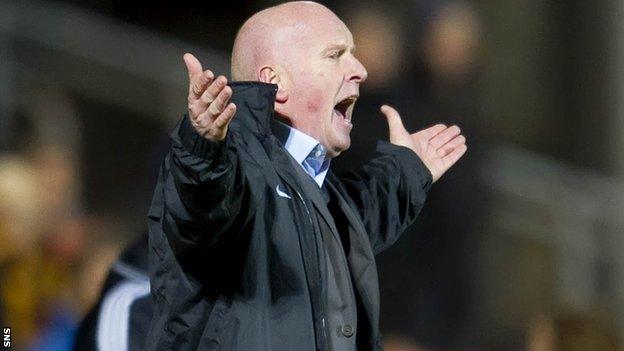 Dundee United manager Peter Houston says his side must get out of the bad habit of going behind in games.

United lost 2-1 to Motherwell at Tannadice and have not won at home since August.

Even though I thought we deserved something from the game, we got nothing

"Now it's beyond a joke. I don't know if it's a mental thing. I'm asking them questions and I'm not getting many answers."

Motherwell went into a two-goal lead with only 10 minutes on the clock through strikes from Michael Higdon and Chris Humphrey.

"It shouldn't be like that and for the last four of five games it's been like that," said Houston.

"They're doing that, but unfortunately we're giving ourselves mountains to climb.

"For 65 minutes we absolutely chased the game and it's crisis management in the side - we've got to just battle on and try to get people forward.

"Even though I thought we deserved something from the game, we got nothing."

Jon Daly pulled a goal back for Dundee United just before half-time and John Rankin went close to equalising five minutes into the second period with a left-foot volley.

Making his first start, Rudi Skacel eventually had the ball in the back of the net for the Tangerines, but it was ruled offside.

"The cross comes in, Daly's won it at the back post and knocks it back the way and Skacel scores," added Houston.

"I don't know if it was originally Daly that was offside but I'll need to see that again."